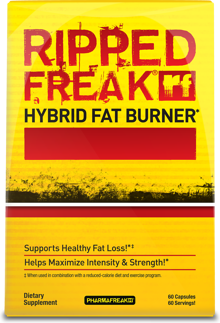 Go to Store
Quick Links to Deal PricesHow does this work and how do stores get listed? See our disclosure below to learn more.
Size
Deal Price
60 Capsules
$34.50
Go to Store
40 Capsules
$41.40
Go to Store
Go to Store
Compare store prices
See all PharmaFreak Products on PricePlow
Ingredients

"Hybrid" is a term that's been coined by our team of pharmaceutical and organic chemists. A Hybrid is defined as a compound derived from natura that has been synergistically enhanced to deliver more powerful effects! It is the ability of our chemists to alter and synthesize these new Hybrid compounds that make Ripped Freak far stronger than competitive products.*

What Makes Ripped Freak So Unique?

Unlike many other fat burners on the market, Ripped Freak does NOT include tiny amounts of several ingredients in its formula. Instead, Ripped Freak contains a critically selected group of key, fat-loss ingredients, and in HIGH doses, so they can truly have a significant impact on fat loss!*

Unlike many other fat burners on the market that require you to take 2, 3, or even 4 capsules per serving, Ripped Freak is so powerful that 1 hybrid capsule is all you need per serving! (The maximum dose per day is 2 capsules! Never exceed this.)*

The Science Behind Ripped Freak

How does Ripped Freak work?

The Ripped Freak formula also uses the methyl gallate ester, which is a technology commonly used in the pharmaceutical industry. The methyl gallate ester increases the lipophilicity and absorption of ingredients into biological membranes, which provides superior bioavailability and extends the half-life of Ripped Freak's fat-burning compounds in the body. This is why you only need one capsule of Ripped Freak per dose because these unique ingredients provide long-lasting fat-burning effects in the body all day long!*

Do you need to cycle Ripped Freak?

Can Ripped Freak be stacked with other supplements?

Yes. Ripped Freak can be stacked with other nutritional supplements. Many bodybuilders are now stacking Ripped Freak with Test Freak – the world's strongest testosterone-boosting supplement, for the ultimate fat-burning/muscle-building stack!*

Will Ripped Freak cause an energy crash?

No! The methyl gallate ester found in the Ripped Freak formula provides a natural time-released effect, and therefore users will not experience a “crash" in energy, which is common with many other fat burner products. Instead, Ripped Freak users experience a consistent steady stream of energy and fat-burning for 8 to 12 hours!*

Is it okay to use Ripped Freak if I am subject to drug testing?

Anyone subject to banned substance or drug testing should check with their sport's respective governing body before using this product or any other dietary supplements. Read the entire label before use including risk information and follow directions.