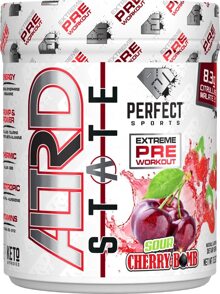 Go to Store
Quick Links to Deal PricesHow does this work and how do stores get listed? See our disclosure below to learn more.
Select Variation(s):
Size
Deal Price
40 Servings
$28.99
Go to Store
Go to Store
Compare store prices
See all Perfect Sports Products on PricePlow
Ingredients

Strength matters. You want the strongest formula to power you through every session. ALTRD State possesses that power. It unleashes an industry-dominating 8.32 g of muscle-swelling, Citrulline Malate (2:1 ratio), 3.2 g of Beta-Alanine, 2 g of Taurine and 1 g of Agmatine Sulfate to give you workout-crushing pumps, strength and power.

ALTRD State creates rapid, powerful, and undeniable motivation within minutes. Add ALTRD State to your pre-workout ritual and it will commit you to an epic, mind-blowing workout for gains you can see and feel. Feel the spine-tingling stimulant power of over 400 mg of triple-source caffeine yielding compounds and the fat-melting combination of synephrine-higenamine.

Experience the mind-altering nootropic power of 600 mg of Acetyl-L-Carnitine (ALCAR), 20 mg of 50:1 Huperzia serrata extract (std. to 200 mcg Huperzine A), 200 mg DMAE and 100 mg Beta-PEA. Test subject after test subject reported a dramatic intensification of sensory experiences combined with mind-sharpening, tunnel-vision focus. Achieve more reps, increased strength and colossal pumps that will do more than change how you look; it will change who you become… literally!

Citrulline is a precursor to nitric oxide production, which stimulates vasodilation and increases blood flow to the muscles. This amino acid helps deliver nutrients to, and waste removal from, muscle cells. ALTRD State provides citrulline malate in a 2:1 ratio, which is the enhanced version shown in research to help athletes perform at higher intensities.

This amino acid combines with histidine (another amino acid) in the body to increase carnosine levels. Carnosine buffers hydrogen ions, which build up during exercise and inhibit muscular contraction. Beta-alanine has been shown to improve performance and delay fatigue during exercise.

Taurine acts as an osmolyte in muscle cells. Osmolytes draw water into the muscle, which increases cell volumization, muscle fullness and sends a signal to initiate the recovery process. This increase in intracellular water also helps the cell maintain proper hydration during training, which is critical for performance.

Agmatine increases blood flow to the brain, acts as a neurotransmitter, which sends information to the central nervous system, and helps with memory formation. Agmatine has also been shown to reduce anxiety, enhance brain function and decrease stress.

Tyrosine serves as a precursor to norepinephrine and epinephrine production. These two hormones are part of the “fight or flight” response, which drive up energy levels. Tyrosine has also been shown to increase mental focus and reduce the effects of fatigue.

Unlike other forms of carnitine, Acetyl-L-Carnitine [ALCAR] is able to cross the blood-brain barrier. ALCAR works to improve the brain’s ability to metabolize and utilize energy, while also showing protective effects against neurotoxicity and oxidative stress.

Caffeine stimulates norepinephrine and epinephrine release. Both of these neurotransmitters prepare the body for the hard-training session to come. Caffeine also has been shown to increase mental focus and performance.

Phenylethylamine is a neurotransmitter that can elevate levels of dopamine, a powerful appetite suppressing messenger, which also influences mood.

Synephrine has been shown to improve performance during moderate-to high-intensity weight training by increasing the number of reps performed. The result has been shown to be even better when stacked with caffeine.

Also known as norcoclaurine, higenamine, is a compound found in plants such as, Nandina domestica (fruit) and Nelumbo nucifera (lotus seeds). Higenamine is classified as a beta-adrenergic agonist, similar to epinephrine (adrenaline), and has been shown to activate an enzyme, adenylate cyclase, which plays a major role in lipolysis (fat breakdown).

A direct precursor to carnitine, GBB rapidly and exponentially increases the amount of this amino acid in the body. The increase has been shown to have a thermogenic effect and cause mild sweating.

The active ingredient in Toothed Clubmoss is Huperzine A. This key nutrient crosses the blood-brain barrier, inhibits the breakdown of acetylcholine (similar to caffeine, but does so 100% stim-free!), protects the brain from toxicity and improves memory.

ALTRD State provides a variety of B vitamins to help prevent deficiency and support energy metabolism.

AVAILABLE IN THESE FLAVOURS: