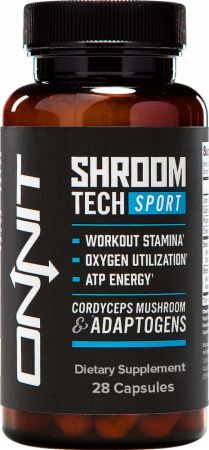 Go to Store
Quick Links to Deal PricesHow does this work and how do stores get listed? See our disclosure below to learn more.
Size
Deal Price
84 Capsules
$26.95
Go to Store
28 Capsules
$11.89
Go to Store
Go to Store
Compare store prices
See all Onnit Products on PricePlow
Ingredients

The idea behind Shroom TECH Sport was to create a supplement that real athletes could take safely every day — even the day of competition. We wanted clean energy, ingredients with a history of use in high-level competition, and general health benefits; we believe we have found it in our exclusive combination of cordyceps sinensis mushroom, adaptogens, antioxidants, and methyl B-12.*

Shroom TECH Sport battles exercise fatigue with a strategy unlike any other supplement on the market, providing cellular energy through the production of ATP rather than purely stimulant-based energy, and helping the body to improve oxygen utilization so you can go longer, recover faster, and set a new personal best.*

Several thousand years ago high in the mountains of Tibet, herdsmen noticed that when their herds grazed on caterpillar fungus, they were noticeably more lively, energetic, and could stay on the move for far longer. Taking a lesson from their animal kin, they sampled the mushroom and found a similar effect. Unbeknownst to them were the mechanisms of action behind this highly prized mushroom. Containing the active ingredients adenosine and cordycepic acid, as well as a host of phytonutrients, cordyceps has been shown in some studies to increase oxygen utilization, aerobic capacity, and cellular energy.*

One of the pillars of Ayurvedic medicine, this tonifying herb that is often called “Indian Ginseng” is prized for many varied benefits. As with most adaptogens, Ashwagandha is useful in helping the body handle occasional stress by supporting a variety of bodily functions with its combination of withanolides, alkaloids, fatty acids, and amino acids.* The particular ability of Ashwagandha to help support mental acuity and reaction time, possibly due in part to cholinergic activity, also makes this herb of particular value to athletes.*

Green tea has been associated with good health for thousands of years, but only recently has science understood exactly why. With the combination of catechins, polyphenols, and the highly potent EGCG, green tea extract has been shown to be 20 times more antioxidant-active than Vitamin C.* In addition, green tea will offer the body its well known effects on energy and metabolism.*

Rhodiola rosea herb grows in the Arctic regions of eastern Siberia. Russians have been drinking rhodiola tea for centuries as an energy booster and Russian and Chinese scientists have researched the benefits of Rhodiola root for several decades. The root has a reputation for stimulating the nervous system, enhancing work performance and decreasing fatigue.* Interestingly, in smaller doses the herb is believed to be more stimulating than in larger doses.*

B12 is one of the most popular energy-associated B vitamins, however by unlucky accident the most common lab-produced form of B12 is cyanocobalamin, not Methylcobalamin. Cyanocobalamin is created through charcoal filtering and leaves the body to shed a small amount of excess Cyanide. We are using the coenzyme form of vitamin B12, known as Methylcobalamin or Methyl B12. It's the only form of vitamin B12 which can directly participate in homocysteine metabolism.*

Fatigue Is The Enemy

"Fatigue makes cowards of us all." Whether those words were coming from the mouth of General Patton or Vince Lombardi, the truth of it remains the same. For any of us who have been in competition, we understand it all too well. For the fighter, fatigue will tell you that the jab you keep eating really isn't worth slipping. For the basketball player, fatigue will tell you to settle for the jumpshot. For the tennis player, it will tell you that you probably couldn't run down that cross-court anyway. There is no getting around the fact that fatigue is the demon every athlete must battle. Shroom TECH Sport is a new weapon to battle fatigue.*