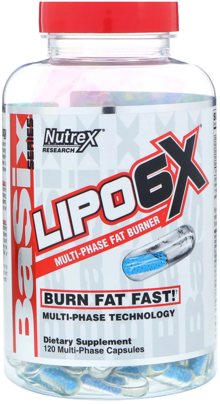 Go to Store
Quick Links to Deal PricesHow does this work and how do stores get listed? See our disclosure below to learn more.
Size
Deal Price
60 Capsules
$49.99
Go to Store
Go to Store
Compare store prices

Award winning Lipo-6X now back in stock on Nutrex.com. The original multi-phase fat loss phenomenon is back and it’s better than ever! This fully disclosed no proprietary blend formula contains only the purest metabolism boosting and fat incinerating ingredients available today. With its unique Multi-Phase release technology you get a fast acting dispersion of powerful ingredients designed to go to work quickly shutting down your appetite and firing up your metabolism. Phase two’s delayed release of micro beads deploy sustained actives assuring all day benefits for maximum results.

Tried and true Caffeine Anhydrous is a must for weight loss/thermogenic formulas. This 99.9% pure caffeine will boost energy levels and mood as well as help with fat loss from the revved up metabolism and fatty tissue stimulation.*

Hordenine is a derivative of tyramine found naturally in various plants. It also acts as an MAO-B selective inhibitor, which in layman’s terms, can potentiate other stimulants taken orally as well as prolong the effects to some degree of chemical and neurotransmitter release in the brain like norepinephrine and dopamine. By itself, hordenine does not exhibit very strong stimulant effects actually, so no worries here of the “cheese effect” with standard high doses of tyramine. If you ask me, anything that further prolongs the “feel good” effects of other ingredients in the mix as well as amplifies their thermogenic and mood enhancing effects, is a welcome addition to any blend. Who says you can’t feel good while losing weight.*

Synephrine HCl is a naturally occurring alkaloid found in bitter orange plants. Multiple clinical studies have shown that synephrine supports weight-loss through the increase in metabolism, as well as, an increase in lypolysis (fat breakdown). Further research has indicated how synephrine works on the receptors located on fat cells to help enhance the lipolysis within the cells and with the receptors that increase thermogenesis of muscle, which should result in weight-loss. Another benefit that I am sure everyone will be excited to know is that synephrine has shown to be an appetite suppressant as well. While dieting we all will experience the hunger and cravings that come with losing weight. Being able to manage those hunger and craving issues will help you hit your weight-loss goals easier & faster.*

Yohimbine HCl is derived from the bark of a Wet African evergreen tree known as Yohimbie. Yohimbine HCl is taken by individuals looking a powerful fat burning energy-boosting supplement. This supplement is categorized as a stimulant due to its ability to increase the rate and release of adrenaline (epinephrine) and norepinephrine in the bloodstream. This response is one of the main reasons why Yohimbine works as a fat burning aid. Increases in epinephrine and norepinephrine will result in increased thermogenesis & metabolism leading to heightened levels of fat-loss when combined with proper diet and exercise.*

Also known as alpha-yohimbine, it is the more potent isomer of yohimbine. It’s mechanisms of action are very similar to yohimbine, as it can act as an alpha(2) adrenergic antagonist and thus aid in fat burning. The cool part is breaking down how this helps you lose fat, because it is not directly by inducing fat loss. On the contrary, it alleviates the pressures and processes imposed by the body to preserve fat mass. In other words, think of rauwolscine as an ingredient that tells your body “Relax bud, you don’t need to hold onto this fat. There is muscle beneath it waiting to make an appearance.” In addition, rauwolscine also shares the same aphrodisiac and mood enhancing properties as yohimbine, which I think everyone can safely agree, is never a bad thing.*