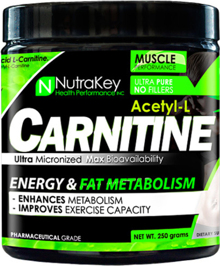 Go to Store
Quick Links to Deal PricesHow does this work and how do stores get listed? See our disclosure below to learn more.
Size
Deal Price
250 Grams
$19.79
Go to Store
60 Capsules
$7.59
Go to Store
Go to Store
Compare store prices
See all NutraKey Products on PricePlow

Improves exercise capacity and fat loss: Acetyl-L-Carnitine facilitates the metabolism of fatty acids for energy generation. A greater reliance on fat for energy can result in a sparing of muscle glycogen, an enhancement of exercise performance, and a reduction in stored body fat. Acetyl-L-Carnitine has a profound effect on endurance and exercise performance that works by reducing the respiratory exchange ratio and decreasing lactic acid accumulation in muscles. This results in extended exercise capacity before the onset of fatigue.