Click the button above and PricePlow will email you with updates from NutraBio. 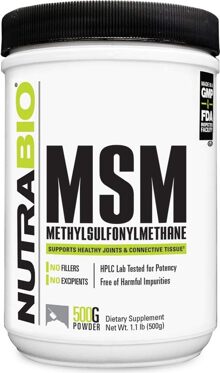 MSM (methylsulfonylmethane) is a naturally occurring source of organic sulfur that is found in the tissues and fluids of all living organisms. MSM is easily absorbed and used by the body and is one of the major building blocks of glycosaminoglycans. Glycosaminoglycans are key structural components in cartilage that play an important role in the maintenance of joint cartilage. MSM supports joint function by donating sulfur for maintenance of healthy connective tissue.

What is MSM (methylsulfonylmethane):

Methylsulfonylmethane (MSM) is a naturally occurring sulfur compound and nutritional component of many foods. It is found in the normal diets of humans and almost all other animals. MSM is made up of 34% sulfur, the fourth most abundant mineral in the human body. MSM supports healthy, active lifestyles and benefits multiple structures and functions within the body, including connective tissues and the respiratory system.

MSM (methylsulfonylmethane also called methylsulphonymenthane) is best known for aiding in joint health but has also been shown to support liver detoxification and provide many other health benefits.

Click the button above and PricePlow will email you with updates from NutraBio.