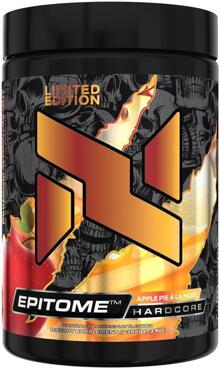 Go to Store
Quick Links to Deal PricesHow does this work and how do stores get listed? See our disclosure below to learn more.
Select Variation(s):
Size
Deal Price
20 Servings
$49.99
Go to Store
Go to Store
Compare store prices

The Hardcore Version of Pre

What is the perfect example of a pre-workout supplement? You’re looking at it. The best pre workout will check all the boxes: Energy, Pump, Focus, and Performance. Epitome Hardcore exists to make you the perfect representation of your physical aspirations – whether they are to have more muscle, less body fat, or more strength. Using a well-rounded profile of the best science has to offer, Epitome Hardcore was built to smash plateaus and create perfection.

Don’t let your efforts go unnoticed. Become better by capitalizing on every biological pathway that contributes to better performance and body composition. Be the Epitome.

The differences between Epitome and Epitome Hardcore concern their stimulants. Epitome Hardcores takes the energy and focus ingredients of Epitome and gives them a more hardcore orientation. It still features N-Phenethyl Dimethylamine Citrate, and 1.5mg each of yohimbine and alpha yohimbine (instead of 3mg of the latter), as well as some additional stimulants (75mg of hordenine and the vaunted, prized 2-amino).