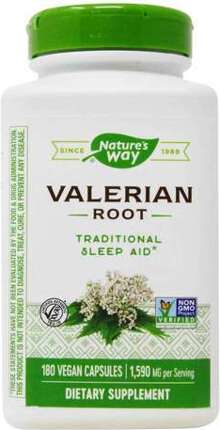 Valerian root extracts are used to help promote relaxation and more sound, restful sleep. Nature's Way specializes in top quality herb extracts, making their Valerian Root capsules a smart choice for anyone seeking natural support for sleep and a calm, restful mood. Most people find Valerian capsules like these from Nature's Way much easier to use than liquid valerian extracts because of valerian's characteristically pungent aroma and taste. Valerian capsules are a much better way to go. Nature's Way Valerian Root is non-habit forming.

Valerian has a relaxing effect on the nervous system, it promotes relaxation in persons leading a hectic lifestyle and helps support restful sleep. It was used and promoted anciently by 10th century Arabic physicians, it is still very popular in Europe and western Asia.

Manufacturer's Directions
Take one to two capsules with water one hour prior to bedtime or prepared as a tea.

Manufacturer's Disclaimer
Do not drive or operate heavy equipment while taking this product.

There is some controversy regarding whether it is safe for pregnant or lactating women. European Pharmacopoeias list no contraindication to use of Valerian root during pregnancy or lactation. However, as a general rule, caution and moderation are advised during this condition.

Persons taking sedatives or antidepressants should consult their physician before taking Valerian.

Should not be used by children under 12 years of age.

Concomitant use of Valerian with alcoholic beverages is contraindicated. Alcohol will increase the sedating effect. Although Valerian is not known to over-sedate as a rule, individuals should be urged to avoid driving or operating heavy equipment if taking.