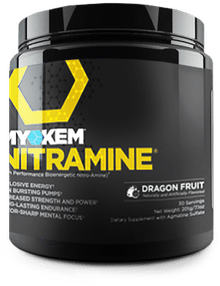 Go to Store
Quick Links to Deal PricesHow does this work and how do stores get listed? See our disclosure below to learn more.
Select Variation(s):
Size
Deal Price
30 Servings
$25.99
Go to Store
Go to Store
Compare store prices

The best new pre workout supplement of 2014? We think so.

You may have caught some of the buzz… you may have seen an ad here or there… or maybe you've seen the product at your online retailer of choice. One thing for sure is that the early buzz about Nitramine has been as intense and unique as the product itself.

Some products hit the market creating an entirely new niche of supplement. We've seen products become the "next big thing" by doing what previous ones did… only better and safer with different sets of ingredients. Myokem's premiere supplement, Nitramine, carves its own corner in the pre-workout game… redefining levels of focus, performance and more.

Head on over to our blog to read Brandon's Nitramine Review. He scores it on ingredients, effectiveness, taste, and mixability.

At the end of the day, this truly is looking like 2014's best pre workout supplement of the year.

So what DOES every ingredient do for you?

Myokem really knocks this one out of the park, with a massive dosage of muscle-builders followed up with a top-notch focus blend that's found nowhere else in the pre workout market.

Aka Trimethylglycine, or TMG for short. We don't know what took so long but this phenomenal compound is finally getting the rep it deserves in the supplement industry. It's found in beets and spinach… so don't worry… it's completely natural.

Why make Betaine the most abundant ingredient? Probably because it could have a hand in every benefit of the anabolic processes. For instance, it enhances the signaling IGF-1 and growth hormone. It keeps your muscular hydration in check to make sure you're still getting that ongoing pump.

But there's still more. Increases lean mass, which also means fat loss. It can also reduce fatigue, greater muscular endurance, and of course more strength. Wouldn't you want all of those benefits at the top of your pre-workout?

Otherwise known as LCLT on the street, its benefits are also no secret at this point. A main benefit of this antioxidant is basically releasing fat for use as energy. Other perks include reduced recovery time, reduced soreness, improved testosterone, and reduced muscle wasting.

There are several forms of L-Carnitine, but when it comes to muscular performance enhancement, LCLT is the one variation that rises above the rest.

Science is about trial and error right? Arginine was supposed to be the big staple for getting that nitric oxide flow. Sadly, it couldn't hang on long enough once broken down into the body. So the labcoats took a bond out and we have the simpler Agmatine.

Aside from the nitric oxide boost it provides, there are brain benefits, better distribution of nutrients, better glucose absorption, and better testosterone production via the luteinizing hormone. The pumps are terrific, but these extra benefits make it worth even more.

No other drug is more commonly used than caffeine. However, we all know the intensity, focus and elevated performance benefits. Most supplements and drinks now include the anhydrous form because it has a better effect on the body than the common form you'll get out of coffee.

This compound is a special pairing of niacin and GABA. This combo bond has positive effects on short term memory and functional learning. It is the "relaxer" that smoothes out the feeling you get from the other stimulants, by pulling its GABA compounds through the blood-brain barrier and getting more blood flow to the brain.

Choline is an extremely beneficial cognitive enhancer. There are several forms of it, but none is of higher quality than citicoline, or Choline CDP. This compound goes also directly into the blood-brain area. It pokes at your central nervous system to release dopamine and noradrenaline for additional stimulation -- also more added benefits for learning and memory.

The reason you don't see it on more labels is because it's expensive -- nearly 100x more expensive than other forms of choline. But it works so much better, and you will feel the difference in focus when you try Nitramine.

This naturally occurring amine is one of those excuses we all have to eat dark chocolate, or even cacao if you prefer. This is one gets into your blood brain area for mood enhancement, concentration and even arousal (down boy!). Just because it likes to be so cool, it throws in fat release for energy and expanding lung functions.

Your training, conditioning, competition will always test your heart. This one has your heart's back with improved cardiac function. Like Theobromine up there, it also assists with lung function. It is also thermogenic - when you feel a bit of extra heat from Nitramine, higenamine is a main reason.

A stimulant by way of releasing norepinephrine. Is it starting to add up how much focus is bound to happen here?

A stimulant by way of releasing noradrenaline. Although it's not the most potent one, it improves fat loss capabilities in methods similar to the higenamine.

This is possibly the key to the focus blend in Nitramine. It is great at boosting brain function by improving memory-based skills. Needless to say, mental function is its main junction.

You've probably seen some kind of black pepper extract in some fat burners or thermogenics on the market… and for good reason. Anti-inflammatory, antioxidant, etc. But the real reason behind including is the use of piperine, its main extract, is because it improves nutrient absorption. The piperine in the black pepper extract makes every ingredient better.

The name just sounds mean doesn't it? You've likely seen it in other supplements by the name Alpha Yohimbe, which aids in fat loss. It is the last ingredient, so if you're sensitive to yohimbe, note that it's going to be a minor dosage.

Putting it all together

So that's the breakdown of ingredients.. But what does it really mean Nitramine can do for us? How about we break it down by benefit. If we want better physical performance, we have betaine, LCLT, beta alanine, agmatine, caffeine, higenamine. If we want stimulation, we of course have caffeine; also hordenine, tyramine and yohimbine. Fat loss? It's almost easier to tell you which ingredients DON'T help you burn fat.

It's all about the Focus

But where you think you know but have no idea until you try it… is the kind of focus that Nitramine has formulated for your pleasure. Pikatropin, citicholine sodium, theobromine, Huperzine A, and black pepper all have various benefits. However they come together to provide you with the kind of focus that is pretty much unheard of up to this point.

And for that reason, we truly believe this will be a top pre workout supplement in 2014.