Click the button above and PricePlow will email you with updates from Muscle Elements. 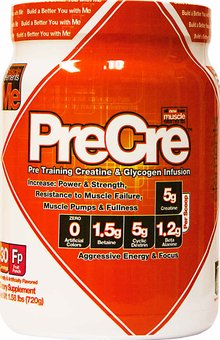 PreCre by Muscle Elements is one of our favorite pre-workouts on the market, and comes with an impressive 5g of creatine to boot. If you're looking for a pre workout to give you a huge pump and help you build muscle in one true scoop, look no further!

We'll break it down in greater detail below, but there's two key things to know about it:

Sadly, giving you enough creatine to actually show an effect is a big deal in today's marketplace, simply because so many products aren't bothering to do it. Not Muscle Elements!

Adequate carb content is equally important, however. Carbs have fallen by the wayside in pre-workout products over the years, and it's been so long since good products have been dosed with them that some users may have forgotten what a proper "carb pump" feels like!

Also worthy of note here is the new PTS-SURGE formulation, which acts as a nutrient partitioner to help facilitate the carbs. Between that and the other NO boosters in this mix, you're looking at one of the most ridiculous pumps in your workout career!

Before we get into the ingredients, let's take a look at our PreCre Review:

To sum it up - Muscle Elements Pre Cre is a beast, and is 2015's must-try pre workout supplement!

Compare prices below and save money at PricePlow!

Click the button above and PricePlow will email you with updates from Muscle Elements.