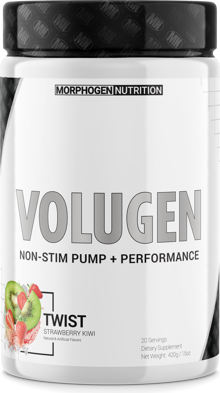 Go to Store
Quick Links to Deal PricesHow does this work and how do stores get listed? See our disclosure below to learn more.
Select Variation(s):
Size
Deal Price
20 Servings
$56.00
Go to Store
Go to Store
Compare store prices
See all Morphogen Nutrition Products on PricePlow

Recommended Use: As a dietary supplement, mix 1 scoop in 12-16oz water (depending on flavor preference) and consume 15-30 minutes pre-workout or in the morning on non-training days to optimize blood flow and cognition.

What's different with the new formula?

We moved the Rhodiola to MorphoCALM to better assist with stress management, and added DMAE Bitartrate to assist with focus and cognition.

We replaced Vaso6 with the newly formulated CellFlo6 by the same company. CellFlo6 is a very impressive new iteration that confers the same blood flow benefits but also helps with focus as well.

We also added Setria branded Glutathione which can extend the duration of your pumps.

What can VOLUGEN be stacked with?

VOLUGEN is no doubt incredible on its own.

ALPHAGEN + VOLUGEN (AlphaPUMP stack, returning soon) is the most comprehensive pre-workout stack available in the industry. Mix 1 scoop of each in a full shaker of water (16-24oz) and drink 20-30 minutes before training and get ready for the most productive workout you've ever had.

Why do you use artificial colors and sweeteners in your products, aren't they unhealthy?

The non-active ingredients we utilize (flavors, colors, sweeteners) are all perfectly safe for a vast majority of people when consumed according to label instructions. In very rare cases an individual can have an allergy to a certain ingredient (even active ingredients).