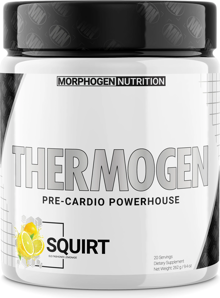 Go to Store
Quick Links to Deal PricesHow does this work and how do stores get listed? See our disclosure below to learn more.
Size
Deal Price
20 Servings
$47.60
Go to Store
Go to Store
Compare store prices

Can this be stacked with pre-workouts such as ALPHAGEN or VOLUGEN?

Due to the potency of THERMOGEN, we strongly advise against combining it with any other stimulant-based supplement or medication, including ALPHAGEN.

I notice I get some cold sweats when taking this product. Is that normal?

Alpha-Yohimbine can cause some mild cold sweats in some people and is perfectly normal. This effect usually subsides with consistent use.

Coupled with the GBB and you will likely notice an increased rate of perspiration.