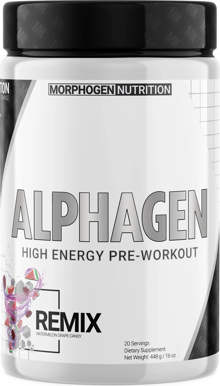 Go to Store
Quick Links to Deal PricesHow does this work and how do stores get listed? See our disclosure below to learn more.
Select Variation(s):
Size
Deal Price
20 Servings
$47.60
Go to Store
Go to Store
Compare store prices

Recommended Use: As a dietary supplement, mix 1 scoop in 12-16oz water (depending on flavor preference) and consume 15-30 minutes pre-workout. Start with ½ scoop to assess tolerance. Gradually build up to 1 scoop.

What's different with the new formula?

We removed daily loading ingredients like creatine monohydrate and beta-alanine as they don't provide much of an acute effect before exercise.

This opened up space in the scoop for an industry-leading dose of 10,000mg L-Tyrosine.

We also changed the stimulant blend slightly to provide smoother, longer lasting energy and also enhancing mood and motivation more than ever!

What can ALPHAGEN be stacked with?

ALPHAGEN is no doubt incredible on its own.

ALPHAGEN + VOLUGEN (AlphaPUMP stack, returning soon) is the most comprehensive pre-workout stack available in the industry. Mix 1 scoop of each in a full shaker of water (16-24oz) and drink 20-30 minutes before training and get ready for the most productive workout you've ever had.

Some people mix 1/2 scoop ALPHAGEN with 1/2 - 1 scoop THERMOGEN for a fat-burning, mood elevating, sweat inducing powerhouse of a pre-workout or pre-cardio stack!

Why is the caffeine so high?

Formally, the dose of caffeine used in ALPHAGEN aligns with research suggested dosing of caffeine in strength training athletes.

But we get it. If you aren't used to seeing 400mg caffeine on the label, it can be a little scary and intimidating. While we always recommend people start with less than a full serving just in case, this dose is tolerated very very well by a large majority of users.

We also balance out that caffeine dose with a HUGE dose of L-Tyrosine, which helps manage stress during stimulating activity (such as exercise), as well as a moderate dose of L-Theanine which has a synergistic effect when paired with caffeine.

Basically, they help mitigate any possible shakiness from the stimulants while maximizing their benefits.

Why do you use artificial colors and sweeteners in your products, aren't they unhealthy?

The non-active ingredients we utilize (flavors, colors, sweeteners) are all perfectly safe for a vast majority of people when consumed according to label instructions. In very rare cases an individual can have an allergy to a certain ingredient (even active ingredients).