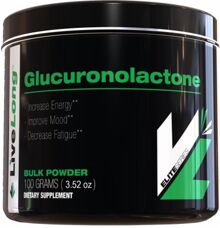 Glucuronolactone from LiveLong Nutrition contains a unique byproduct of glucose metabolism which has been studied for its effects on physical and mental performance. Found in some energy drinks, this unique compound has been shown to increase endurance and reduce post workout fatigue by enhancing the liver’s ability to process toxic metabolites formed during exercise.* Other studies show great promise for its ability to promote mental function and cognitive support.*

Glucuronolactone has several unique effects on physical performance that aid in maintaining energy levels as well as decreasing the amount of time it takes to recover from physical exercise. Glucuronolactone can also support the process by which the liver removes excess toxins from the body; a process known as glucuronidation. Many users report feelings of increased endurance, strength and energy after consumption of Glucuronolactone.*

Several studies suggest that Glucuronolactone may also be beneficial for mental energy as well as physical endurance. Users report increased reaction time, reduced mental fog and fatigue, as well as overall boost in feelings of well being. Glucuronolactone combined with other supplements like caffeine, can have a synergistic effects on the benefits of those supplements.*