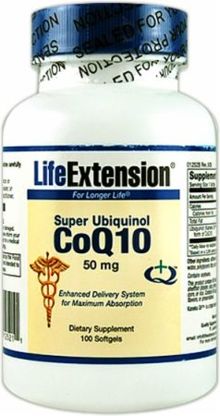 The mitochondria are the cells' energy powerhouses, and coenzyme Q10 (CoQ10) is an essential component of healthy mitochondrial function.23 CoQ10 is required to convert the energy from fats and sugars into usable cellular energy. Yet, the body's production of CoQ10 declines significantly with advancing age.24 With an ample amount of CoQ10, the mitochondria can work most efficiently throughout the entire body, including the most densely populated area, the heart.*25 CoQ10 also exhibits antioxidant properties, which may help support mitochondrial function.*26

When CoQ10 is orally ingested, only a certain percentage is actually absorbed into the bloodstream. Findings in human subjects indicate that higher doses of CoQ10 may help provide significantly better effects than the doses supplement users typically take. Since CoQ10 is a comparatively expensive nutrient, an alternative to taking higher doses is to increase the amount of CoQ10 that is absorbed. Life Extension offers the highly bioavailable ubiquinol form of CoQ10 in a patented delivery system with a higher absorption level.31

This latest formulation contains an organic compound called PrimaVie shilajit that research suggests may support increased levels of CoQ10 in the mitochondria.*33 Shilajit has been suggested to help restore and sustain cellular energy.* The latest studies surmise that when shilajit is combined with CoQ10, cellular energy gains may increase.* In a breakthrough preliminary study, the combination of CoQ10 and shilajit produced a 56% increase in cellular energy production in the brain, 40% better than CoQ10 alone.* In muscle there was a 144% increase, or 27% better than CoQ10 alone.*34 Researchers have suggested that shilajit works to boost CoQ10's beneficial effects by: