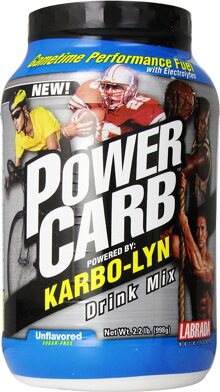 Go to Store
Quick Links to Deal PricesHow does this work and how do stores get listed? See our disclosure below to learn more.
Select Variation(s):
Size
Deal Price
45 Servings
$26.99
Go to Store
Go to Store
Compare store prices
See all Labrada Products on PricePlow

Power Carb is a functional carbohydrate “superfood” engineered to rapidly replenish muscle glycogen, increase nutrient uptake, and enhance muscular function. With Power Carb, you will never suffer through a bad workout or flat athletic performance again! That’s because it’s been carefully engineered by Labrada Nutrition researchers to significantly increase glycogen stores inside your muscles – much faster than pasta, rice, or other carbohydrates. This literally forces glycogen storage, resulting in a huge increase in energy and the ability to perform harder and longer. And because every gram of glycogen pushed into muscles pulls in four grams of water, you can expect your muscles to fully hydrate, with your skin pulled tightly around them, resulting in a more muscular appearance, starting with the first dose!

How Does Power Carb Work?
Power Carb is a homogenous, relatively-complex carbohydrate made up of thousands of sugar molecules, joined together by glycosidic bonds to form branched macromolecules (large molecules). The molecular mass of Power Carb has been engineered to enhance gastric transit through the stomach at a rate much greater than common carbohydrates such as waxy maize, maltodextrins, breads, pasta, or rice.