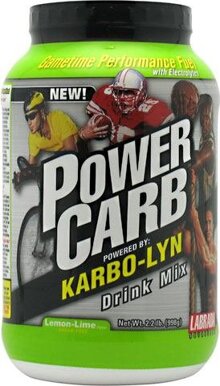 Go to Store
Quick Links to Deal PricesHow does this work and how do stores get listed? See our disclosure below to learn more.
Size
Deal Price
2.2 Lbs.
$27.44
Go to Store
Go to Store
Compare store prices
See all Labrada Products on PricePlow

Maximize Your Performance...Outlast Your Competition!

What is Power Carb?

Power Carb is a patented carbohydrate "superfood" designed to improve athletic performance. Because Power Carb is derived from natural sources, it can be safely used by athletes of all ages to boost energy and enhance recovery. Power Carb is rapidly absorbed - up to 12 times faster than ordinary carbohydrates such as bread or pasta!

Power Carb is fortified with electrolytes to replenish mineral loss from sweating. Power Carb is a nutritional breakthrough that will forever change the way you play the game! You'll never suffer through a bad workout or flat athletic performance again!

How Does Power Carb Work?

Power Carb is a homopolysaccharide (homogenous, relatively-complex carbohydrate) made up of thousands of monosaccharides (sugar molecules) joined together by glycosidic bonds to form branched macromolecules (large molecules). The molecular mass (molecule size and weight) of Power Carb has been engineered to enhance gastric transit through the stomach at a rate much greater than common carbohydrates such as waxy maize, maltodextrins, breads, pasta, or rice.

What Can Power Carb Do For Me?

Use Power Carb before, during and right after training or games to boost your energy, prevent the onset of fatigue, and then jumpstart the glycogen recharging process to shorten your post training recovery time. Power Carb is excellent for athletes who have multiple training sessions or games per day - use it to decrease down time and increase energy for an extra 1-2 hours.

Power Carb is SUGAR-FREE, completely instant, and easily digestible! It is absorbed very quickly without stomach bloating or discomfort. Unlike conventional sports drinks, Power Carb will not "weigh you down" or make you feel bloated.

Does Power Carb Rehydrate Me?

YES! Because Power Carb passes through the stomach very quickly, it acts like a pump, pulling water and electrolytes along with it, which are then shuttled into your muscle cells. Unlike conventional carbohydrate sports drinks, Power Carb will not pull water from the intestines. In fact, it increases water uptake, resulting in much higher hydration.

Is Power Carb Right For Me?

Power Carb is a safe, powerful performance supplement for athletes of all ages. Power Carb works equally well, whether you are a strength or endurance athlete!