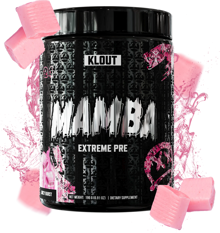 Go to Store
Quick Links to Deal PricesHow does this work and how do stores get listed? See our disclosure below to learn more.
Size
Deal Price
20 Servings
$39.95
Go to Store
Go to Store
Compare store prices
See all Klout Products on PricePlow

MAMBA, the high-stim, pure, unaltered power and energy pre-workout. Let’s cut straight to the point, you’re buying pre-workout because you want to feel invincible in the gym, so that’s exactly what we made this product for. We could say all the other cool things about this product, or just tell you that it’ll give you the most energy you’ve ever had for a workout…..

Caffeine Anhydrous
Caffeine prior to exercise has been found to provide extended endurance for physical training, along with an increase in energy levels. Caffeine stimulates the central nervous system by blocking adenosine, a neurotransmitter that normally causes a calming effect in the body.

Di-Caffeine Malate
Di-Caffeine Malate works to replenishing the energy produced by caffeine, which helps to minimise the dreaded post-caffeine energy ‘crash’. It does this through a precise combination of caffeine and malic acid fused together using an ionic bond into a compound known as di-caffeine malate.

L-Tyrosine
L-tyrosine reduces the effects of stress and allows for greater mental focus and endurance while also improving memory and performance. L-tyrosine works to optimize the effectiveness of the energy and focus ingredients in KARMA.

Velvet Bean Extract
Mucuna Pruriens (Velvet Bean Extract) supports mental alertness and motor skills while also stimulating the production of the growth hormone. It also contains a multitude of active ingredients including serotonin and L-dopa, the main precursor of the neurotransmitter dopamine.

Gamma Butyrobetaine
Increases L-Carnitine, which in turn will help create more energy though fat breakdown. Additionally, it increases Nitric Oxide levels to help give you more pump and blood flow.

AstraGin
Is an extract of two adaptogenic herbs will longstanding history in traditional Chinese medicine. The constituents in these plants are suggested to selectively enhance the absorption of biomolecules by increasing intestinal permeability.