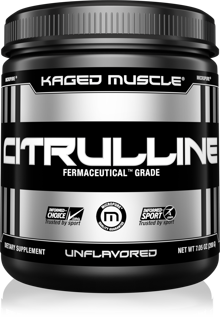 Go to Store
Quick Links to Deal PricesHow does this work and how do stores get listed? See our disclosure below to learn more.
Size
Deal Price
200 Grams
$14.99
Go to Store
Go to Store
Compare store prices

L–Citrulline is an amino acid that has been found to play an important role in nitric oxide (NO) metabolism and regulation. L-Citrulline is converted to L-Arginine in the body, leading to increases in both L-Arginine and nitric oxide. Increased production of nitric oxide promotes vascular dilation, which helps support normal oxygen and blood circulation.

Conversion from L-Arginine to L-Citrulline

ROLES OF CITRULLINE IN THE BODY

Most L-Citrulline on the market today is made from duck feathers and human hair—not ours!

Combining Kaged Muscle’s L-Citrulline with BCAAs is the perfection combination to help achieve your fitness goals.

* These statements have not been evaluated by the Food and Drug Administration. This product is not intended to diagnose, treat, cure, or prevent any disease.