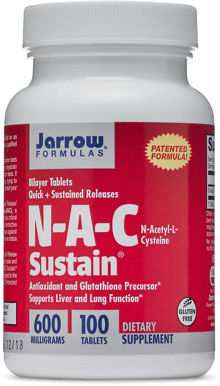 Go to Store
Quick Links to Deal PricesHow does this work and how do stores get listed? See our disclosure below to learn more.
Size
Deal Price
100 Tablets
$17.26
Go to Store
Go to Store
Compare store prices
See all Jarrow Formulas Products on PricePlow
Ingredients

Jarrow NAC Sustain contains a highly bioavailable derivative of cysteine known as N-acetyl-l-cysteine. It’s a potent antioxidant that has liver protecting properties because of its ability to bind to hepatoxic compounds that can damage the liver. NAC is a potent antioxidant that can also bind to other toxins in the body, ensuring that they are eliminating before causing oxidative damage. NAC has also been shown to positively affect neurotransmitter function and as a result can help support healthy brain function. If you’re looking for a premium and effective antioxidant and liver cleansing supplement, try Jarrow NAC Sustain.

NAC Sustain Description from Jarrow
NAC Sustain is a patented, extended release form of N-Acetyl-L-Cysteine (NAC), an antioxidant amino acid and a precursor to the critical antioxidant glutathione. Glutathione exerts a variety of protective effects, including detoxification and intracellular defense against oxidative stress. Substances known to reduce glutathione status are acetaminophen and alcohol.

Manufacturer's Directions
Take 1 to 4 tablets per day, preferably on an empty stomach with fruit juice, or as directed by your qualified health consultant.