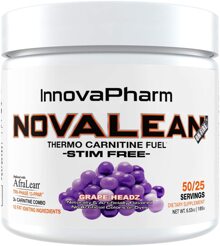 Go to Store
Quick Links to Deal PricesHow does this work and how do stores get listed? See our disclosure below to learn more.
Size
Deal Price
25 Servings
$44.99
Go to Store
Go to Store
Compare store prices

You may have seen other carnitine-based weight loss aids in the past, but NOVALEAN is the furthest thing from “conventional” you’ll find.

In addition to a sizeable 3 grams of carnitine, we’ve also included nootropics to enhance focus and mental energy alongside nutrients that significantly enhance thermogenesis without the addition of stimulants.

And, true to our name, we’ve brought another industry-first ingredient to the market in 13-PPAR Rhizoma Coptidis extract.

Carnitine gets a lot of attention regarding weight loss and fat burning because the mighty molecule serves an essential role in your body’s ability to efficiently burn fat.

Carnitine is the molecular “taxi” that shuttles fatty acids from the bloodstream into the mitochondria where they can be oxidized (burned) for energy.

In other words, a deficiency in carnitine could severely impede the body’s ability to effectively burn fat for fuel.

Anyone who has ever dieted is all too familiar with the fatigue, lethargy, and lack of motivation that accompanies low calorie intakes. As if that’s not bad enough, an incessant brain “fog” also occurs, making it that much harder to focus on your work or training.

Similar to the previous form of carnitine, ALCAR is another highly bioavailable form of carnitine that supports the body’s natural fat burning mechanisms. What’s really noteworthy about Acetyl L-Carnitine is that it readily crosses the blood-brain barrier, where it promotes a range of neuroprotective, neurotrophic, and mood-promoting effects.[3,4]

ALCAR also plays an important role in the synthesis of the “learning” neurotransmitter, acetylcholine.

In order to synthesize acetylcholine, neurons require acetyl-CoA and choline. ALCAR donates its acetyl group to the process providing the “backbone” of this highly important neurotransmitter, which brings us to the next ingredient in NOVALEAN…

Choline bitartrate is a popular form of supplemental choline used in nootropic formulas and pre workouts as it provides the body with extra choline to support production of acetylcholine, and thereby focus, learning, and memory.

But that’s not the only reason choline bitartrate is included here.

A number of studies have investigated the effects of combining choline alongside carnitine and found that choline increases carnitine retention in the body[5,6], which favors uncoupling of fat as well as fat mobilization.

Olive leaf extract is one of the most popular non-stimulant fat loss ingredients on the market. Oleuropein, the main bioactive present in olive leaf, has been shown in research to offer a number of effects that benefit those seeking to lose weight including[7,8]:

Research also finds that even low doses of olive leaf extract may support thyroid function, which can lead to increased energy expenditure (and subsequently weight loss). It may also help combat chronic conditions, such as obesity, diabetes, and various metabolic disorders.[9]

Coleus Forskohlii has long been used in Ayurvedic medicine to promote overall health and vigor. The primary active in the plant, forskolin, has received considerable attention from dieters due to its pro-weight loss effects.

The “magic” of forskolin lies in its ability to activate the cAMP pathway in the body. cAMP (cyclic adenosine monophosphate) is an important signaling molecule used by cells for bodily function, including those tied to fat loss.[10]

A 12-week study in men found that supplementation with forskolin significantly decreased body fat percentage and fat mass.[11] Researchers also observed a trend towards an increase in lean mass.

Afralean is a highly concentrated extract of Grains of Paradise (Aframomum Melegueta) standardized to 16% 6-Paradol — the most potent standardization on the market.

Research indicates that AfraLean can improve calorie burning in a few different ways by:

And, to top it off, AfraLean is caffeine and stimulant free, meaning it will not cause feelings of anxiousness or jitters.

As if 3 grams of combined carnitine wasn’t enough, we’ve upped the ante further with the inclusion of GBB — also known as gamma-butyrobetaine.

GBB acts as a carnitine precursor in the body and is often referred to as “super carnitine” on account of some research noting that GBB is able to significantly increase carnitine plasma levels in humans, which promotes greater fat burning.[14,15]

Be forewarned that GBB is renowned for its powerful thermogenic effects, so don’t be surprised if you feel an intense heat rush when using NOVALEAN!

InnovaPharm has made a name for itself as being one of the most innovative brands in the game, and we’ve continued our commitment to bringing new, intriguing ingredients to the market with Tri-Phase 13-PPAR.

Tri-Phase 13-PPAR is an extract of Rhizoma Coptidis, which contains numerous alkaloids including 13-Methylberberine.

As the name implies, 13-methylberberine is a metabolite of berberine, a compound well known for its antihyperglycemic activities. 13-methylberberine however is shown to have improved absorption and higher accumulation in the body in comparison to berberine. [16]

What makes PPAR Agonists so appealing are the way they utilize fat as a primary energy source, as opposed to protein (muscle tissue) or carbohydrates (glycogen), which benefits both endurance and fat loss.

Fucoxanthin has a unique molecular structure compared to other carotenoids (such as beta-carotene). Due to the unique structure, fucoxanthin has been documented to possess strong antioxidant activity as well as a number of other noteworthy effects (cardiovascular and cerebrovascular protective).[19]

For best results, use before exercise.