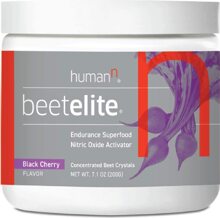 Go to Store
Quick Links to Deal PricesHow does this work and how do stores get listed? See our disclosure below to learn more.
Select Variation(s):
Size
Deal Price
20 Servings
$29.96
Go to Store
10 Packets
$24.95
Go to Store
Go to Store
Compare store prices
See all HumanN Products on PricePlow

HumanN BeetElite Endurance Superfood Black Cherry is the choice of health conscious athletes, who focus on performance from nutrition and foods to stimulate Nitric Oxide. One recommended serving of BeetElite is the Nitric Oxide equivalent of six whole beets. BeetElite feeds your endurance by activating essential nitric oxide in the body, more than other beet products on the market. BeetElite is designed to be a pre-workout shot to support exercise and athletic performance.

BeetElite is trusted by over 90 professional and collegiate teams at the top of their game, as well as numerous current and former Olympic athletes and aspiring professionals in the world of obstacle course racing and endurance sports.

BeetElite, with its concentrated dietary nitrates and nitrites, helps to optimize Nitric Oxide production. If the beet product you’re taking doesn’t contain high levels of nitrates, and other nutrients, it simply can’t provide the same benefits as Beetelite. Let’s face it, none of us want to eat a ton of beets everyday even if you like the taste. That’s where HumanN rises above the rest with our growing and selection standards, scientifically supported formulations based on scientific knowledge and research.

One serving or six whole beets?
One recommended serving of BeetElite supplies the N-O equivalent of six whole beets. No need to fill up on several bottles of beet juice before a competition or a workout. HumanN's concentrated endurance functional food helps the body promote:

HumanN products have a team of scientists behind them.
Their food scientists and nutritionists work together to not only maximize the N-O activating potential in their products, but also to ensure that the body is taking in nutrients found in their functional foods with optimal efficiency.

That’s why they can deliver the Nitric Oxide effect of six beets in a concentrated functional food.

The sweet taste may surprise you.
You don’t need to sacrifice taste for performance. BeetElite comes in Original (with natural apple flavoring) and Black Cherry flavors. Both are refreshing and delicious. So, you can get all of the benefits of this endurance functional food, even if you don’t like the taste of beets.
HumanN stands behind their products. They want to bring the very best functional foods and supplements to humans everywhere.

The Company
Their research on Nitric Oxide first began with the discovery of its unique impact on cardiovascular health. Its immense importance as a biological signaling molecule resulted in the awarding of the Nobel Prize in 1998. Realizing that the discovery of Nitric Oxide had immense potential, it didn't take long for their interest in N-O to become their passion.

Dr. Nathan Bryan, their Chief Science Officer and co-founder, has committed his life's work to the field of N-O research. By partnering with leading N-O discovery programs, such as the University of Texas Health Science Center, Dr. Bryan has identified and continues to identify ways to replenish the body's N-O, and even help the body to promote optimal N-O function.

Ready to bring N-O to the masses, Dr. Bryan co-founded Neogenis Laboratories, now HumanN, in 2009. Consulting with the top N-O scientists, doctors, registered dietitians, and healthcare thought-leaders, there is no other company more committed, or qualified, to bringing the best N-O functional foods and supplements to every human across every phase of life.

UTHealth
They're the only company in the world that holds an exclusive license to use their patented N-O platform technology. They pioneered that technology with the help of the N-O Discovery Program at the University of Texas. As a UT Austin technology portfolio company, they uphold extremely high standards, including continuous testing of their products to verify that they contain the appropriate levels of nutrients to ensure their products are providing the maximum N-O potential. They're also dedicated to conducting human clinical trials to support the safety and efficacy of their products.

Philosophy
Your health determines what you are able to do and the extent to which you can do it. Fortunately, you are more conscious of this relationship than ever before. You know which foods are beneficial and support your health and which ones are bad and detrimental to your health…and you try to eat more and less of each, respectively. You push yourself to exercise harder and more frequently. Or you just move more and sit less every chance you get. But despite your greatest efforts, it's difficult (even for the most disciplined and health conscious of you) to give your bodies precisely what they need to function at optimal levels. This is especially true as you approach the age of 40 and beyond, when your body's natural Nitric Oxide levels begin and then continue to fall. What this means is that too often, you are not feeling or performing at the level you can or should be.

Through their Nitric Oxide-enhancing line of functional foods and supplements, HumanN exists to help every human reach their full potential. A lofty mission, they know. But they wouldn't have it any other way. That's because they provide a real chance to change lives. And when they're at their loftiest, they can alter the trajectory of the entire human race.