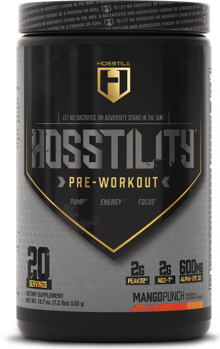 Go to Store
Quick Links to Deal PricesHow does this work and how do stores get listed? See our disclosure below to learn more.
Select Variation(s):
Size
Deal Price
20 Servings
$47.99
Go to Store
Go to Store
Compare store prices
See all Hosstile Supplements Products on PricePlow

Hosstility delivers two premium and potent ingredients that work synergistically to target multiple nitric oxide (NO) pathways, creating the ultimate matrix for a complete, all-out pump experience unlike anything else.

HOSSTILITY delivers a high-potency 6-gram dose of vegan, fermented ultra-pure L-citrulline. L-citrulline is readily absorbed and converted to L-arginine in the body, leading to increases in both L-arginine and nitric oxide.* Increased nitric oxide promotes vasodilation, or the widening of blood vessels, facilitating greater blood flow as well as higher nutrient and oxygen delivery to working muscles during exercise for powerful muscle pumps.*

PeakO₂ is a potent complex of six adaptogenic mushrooms scientifically shown to help the body adapt to and overcome physical and mental stress when performing intense exercise.* By improving oxygen utilization in the body while decreasing lactate build-up in muscles, PeakO₂ supports increased strength, power, and endurance, helping you train harder for longer.* HOSSTILITY delivers a researched 2-gram dose designed to fuel all-out workout performance, from start to finish.*

Betaine has been shown to enhance strength, power, and muscle endurance.* HOSSTILITY features a clinically studied 2.5-gram dose to support your workout performance.* By acting as a methyl donor, betaine may enhance creatine availability.* Similar to creatine, betaine is also osmoregulatory, helping to regulate water balance and promote cell hydration.*

Alpha-GPC, or Alpha-Glyceryl Phosphoryl Choline, is a potent cholinergic compound that enhances choline levels in the brain. Unlike other choline-containing compounds, Alpha-GPC is highly bioavailable and easily crosses the blood-brain barrier, where it quickly takes action to increase circulating acetylcholine (ACh) levels within the central nervous system (CNS). Alpha-GPC supports cognitive performance, delivering enhanced focus.* Research has shown that supplementing with 600 mg of Alpha-GPC enhances power output as well as growth hormone production.*

Patented TeaCrine is a nature-identical, bioactive form of theacrine, a compound similar in structure to caffeine but without the unwanted side effects, such as increased heart rate and blood pressure.* This powerful clinically studied ingredient acts on both the dopaminergic and adenosinergic neural pathways, leading to increased energy, focus, alertness, and motivation to train, enhancing your physical and mental performance in the gym.*

HOSSTILITY delivers a 1-gram dose of vegan, fermented L-tyrosine. Tyrosine is a precursor to neurotransmitters such as norepinephrine and dopamine, which can become depleted during stressful activities like intense training. Tyrosine works to increase these stress-depleted neurotransmitters, supporting enhanced mental performance while you train.*

Huperzine A helps to unlock the full potential of Alpha-GPC for enhanced levels of choline in the body. Huperzine A is a potent inhibitor of acetylcholinesterase (AChE), the key brain enzyme responsible for the rapid degradation of acetylcholine. By combining these two powerful nootropics, HOSSTILITY simultaneously supplies the precursor to and protects acetylcholine, lengthening and stabilizing its effects.*

Infinergy combines a precise dose of caffeine and malic acid for powerful energy support.* The enhanced caffeine matrix in the HOSSTILITY formula utilizes two sources of caffeine to support focus, alertness and energy, helping you push your workout intensity to the next level.* A 135-milligram dose of Infinergy DiCaffeine Malate delivers a total of 100 mg of caffeine per serving. Together with 200 mg caffeine anhydrous, a total of 300 mg of immediate and sustained-release caffeine help promote longer-lasting energy and focus without the crash for more intense workouts.*

Take one serving (1 level scoop) of HOSSTILITY, mixed with 10 fl. oz. of water 20-30 minutes before training.