Go to Store
Quick Links to Deal PricesHow does this work and how do stores get listed? See our disclosure below to learn more.
Size
Deal Price
60 Tablets
$44.96
Go to Store
Go to Store
Compare store prices

Once some companies get going, there's absolutely no stopping them. Hi-Tech Pharmaceuticals has been on a major streak lately with their industry-dominating fat burners, pre workouts, and aggressive muscle builders, and they don't show any signs of slowing down.

But after releasing those new builders, they need to round out the stack with some healthy man protection.

Today, we've got a product that goes along with whatever kind of cycle you happen to be running. Arimiplex is a comprehensive post cycle therapy product that limits estrogen while optimizing testosterone levels when coming off cycle, but it may even be useful when on cycle!

The short story is that Arimiplex has a lot of ingredients for reducing DHT, which is extremely important for anyone predisposed to hair loss via androgenic alopecia. But that's not all - there's also an estrogen inhibitor inside and more!

Find out all about Arimiplex on this page after you've checked our deals and signed up for PricePlow alerts on this page. Now let's get into the ingredients:

Now, this is marketed as a Post Cycle product, but as we've alluded to throughout the article, there are so many great reasons to use this during a cycle as well. 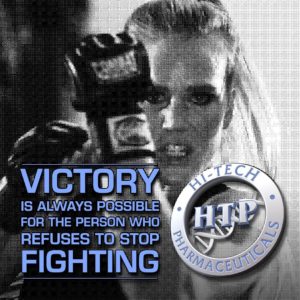 Hi-Tech Pharma does not mess around, and neither does their top sponsored athlete, Holly Holm

The biggest question we have, which we hope to have answered within a couple of months, is whether or not arimistane is enough of an estrogen inhibitor to be used with 4-Andro, which will almost certainly raise testosterone levels quite high, bringing estrogen along with it. Stay tuned to PricePlow on social media, as we'll have that answered soon enough.

One of the most overlooked aspects of a cycle is the need for proper post cycle therapy (PCT) and on cycle support. This is perhaps the most critical aspect of your cycle as it helps your body "down regulated" to its normal homeostasis when not hopped on all sorts of anabolics. During the cycle, your fatty acid levels and liver enzymes will also get displaced, and Arimiplex has support for that as well.

To give your body max protection, and save all your gains, invest in a top of the line PCT product like Arimiplex. Keep the muscle and test, and leave estrogen in the rear view mirror!