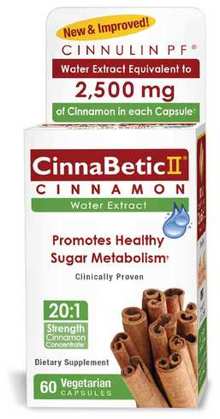 You may have seen or heard the many news reports about cinnamon being good for blood sugar control and diabetes. But it's hard to use plain cinnamon powder for blood sugar support with good, consistent results because the composition of cinnamon varies greatly and - let's face it - you're not going to be able to consume cinnamon at each meal. A better choice would be to use a standardized cinnamon extract, but until recently those have been hard to find. A big wave of demand for cinnamon supplements had many brands scrambling to rush a cinnamon extract to market. But the new science of cinnamon and blood sugar was still being digested, and few of these first-wave cinnamon products seemed get much traction with the public or produce impressive results. Well, now the second-generation cinnamon blood sugar supplements are here, and one of the best is Hero Nutritional's CinnaBetic II.

Hero has been a very innovative brand, probably best-known for their popular Yummi Bear supplements for kids. So it's not surprising that Hero got out in front of the 'cinnamon wave' too with their CinnaBetic II. CinnaBetic II contains a proprietary cinnamon extract known as Cinnulin PF. Cinnulin PF is probably the best cinnamon nutrient available for blood sugar support at this time. Cinnulin PF has the highest level of the key active ingredients in cinnamon known as doubly linked Type-A Polymers and has been processed to remove cinnamon's naturally-occurring toxins.

CinnaBetic II Description from Hero
CinnaBetic II is a dietary supplement designed to promote glucose metabolism by increasing insulin sensitivity. This all-natural extract contains Cinnulin PF which may support healthy blood pressure and may increase lean body mass. CinnaBeticII is superior to table cinnamon and other extracts because it contains double linked type A polymers, which are the active components of cinnamon. CinnaBeticII is the only product of its kind that provides the equivalent of 2500mg of whole cinnamon in each serving.

Manufacturer's Disclaimer
Not intended for pregnant or nursing women, or people with known allergies to cinnamon. If you are taking any medication or have a medical condition, including diabetes or hypoglycemia, consult your physician before use.