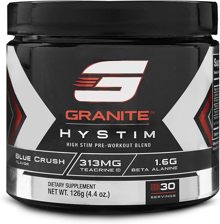 Go to Store
Quick Links to Deal PricesHow does this work and how do stores get listed? See our disclosure below to learn more.
Select Variation(s):
Size
Deal Price
30 Servings
$39.99
Go to Store
Go to Store
Compare store prices

Conventions of modern society mostly call for us to be civilized in deed and manner throughout the course of daily lives, with the notable exception of athletic pursuit. It’s here, especially in the gym, where full-throttle, single-minded aggressive behavior is not only acceptable, but prized. If your goal is building muscle, lackadaisical simply won’t cut it.

To ensure these brief respites from the civilized world aren’t wasted with anything less than laser-like focus, we’ve created the pre-workout, brain-boosting formula HyStim. Hystim contains several ingredients, both time-tested (caffeine, theobromine and Hyperzine A) and cutting edge (theacrine and N- phenethyldimethylamine) that synergistically stimulate central nervous system arousal and enhance mood. So your muscles can keep up, we’ve also included a convenient dose of ß-alanine in HyStim, to build and maintain muscle carnosine levels, and thus buffering capacity and gym performance.

We couldn’t call this product HyStim if we didn’t include caffeine (350mg of caffeine anhydrous), perhaps the world’s most popular energy booster. Caffeine has a wide variety of ergogenic effects and is both thermogenic, and lipolytic, making it a viable staple for any fat loss regimen.

If you’re familiar with Granite Supplement’s line, you know that several of our products showcase what may be the “cleanest” over-the-counter “stimulant” of them all: Theacrine (as 125mg of Tasteless TeaCrine per dose). Theacrine improves mood, focus, subjective feelings of energy, and motivation to exercise, but actually decreases anxiety. Even after months of daily use (300mg), TeaCrine does not lose its effectiveness or hook you into a nasty habit [which often happens with caffeine]. [On the other hand, co-administering TeaCrine with caffeine may actually prevent de-sensitization.]

The HyStim “alkaloid trinity” is topped off by theobromine (100mg), another mood booster for some individuals that counterbalances caffeine’s hypertensive (blood pressure elevating) effect. It’s possible that theobromine may synergize with caffeine to promote arousal but reduce perceived exertion during exercise because it’s also a bronchodilator.

But wait, there’s more! We’ve quadrupled down to ensure HyStim puts you in the right mood to train, by including Huperzia Serrata [the Chinese herb known as Qian Ceng Ta ], standardized for 1% Huperzine A (yielding 100µg). Hyperzine A is rapidly absorbed and inhibits the acetylcholinesterase enzyme , thus prolonging the effect of acetylcholine (ACh) in the synapse. Huperzine-A shows promise in improving cognition, mood and spontaneous activity in Alzheimer’s patients (~100- 800µg/day) with minimal side effects , but Huperzine A isn’t just for aging brains: Twice / day dosing of 50µg improved memory and learning in middle school students as well . As a bonus, Huperzine A seems to be brain healthy, as it protects neurons against injury by a variety of toxins and stresses .

There’s a new kid on the PEA block and he’s part of the HyStim gang: N- Phenethyldimethylamine (150mg, as citrate salt derived from Eria Jarensis) is a phenylethylamine (PEA) compound , meaning it’s structurally similar to tyramine (found in cheese, for instance ], hordenine[found in barley Hapke, 1995 #12129}] and many other biogenic amines, such as those found in chocolate . You’re probably familiar with the PEA derivatives found in our bodies are the catecholamine neurotransmitters (noradrenaline, adrenaline and dopamine)… The mechanistic evidence other several other PEAs suggests that N- Phenylethyldimethylamine’s stimulant actions come via modulating the metabolism of these catecholamines and/or binding to their receptors.

ß-Alanine supplementation fills your muscles’ carnosine tanks, topping off your capacity to buffer acidity during high intensity efforts. This means a stronger kick at the finish line, better performance lifting weights or doing intervals, and more importantly, more muscle mass. The 1.6g dose of ß-alanine found in HyStim alone should produce a modest increase in muscle carnosine levels, but limit the skin-tingling (paresthesia) side effect that larger doses of ß-alanine are famous for. [NOTE: Ergogenic effects from ß-alanine are a probably a matter of increasing muscle carnosine over time. Supplementing with an additional ~3-4g of ß-alanine, spread throughout the day should produce much higher carnosine levels more quickly, but a cumulative dose of ~180g, spread over a longer loading period, should also do the trick.