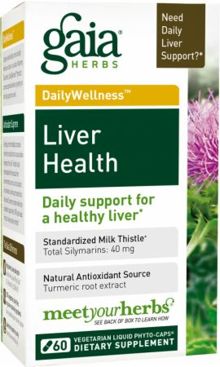 Go to Store
Quick Links to Deal PricesHow does this work and how do stores get listed? See our disclosure below to learn more.
Size
Deal Price
60 Vcaps
$17.49
Go to Store
120 Vcaps
$35.71
Go to Store
Go to Store
Compare store prices
See all Gaia Herbs Products on PricePlow
Ingredients

Liver Health is a powerful liver-support formula that helps fight free-radicals that are generated during stressful engagement with so-called toxins.* When a substance is metabolized in the liver, free-radicals are generated; this is a simple fact of nature. By direct antioxidant action, as well as supporting the function of the liver, this formula exerts a powerful influence.* The support of healthy tissue is also relevant for a number of herbs in this formula.*

Milk Thistle seed has a long history of traditional use; primarily as a support to liver health.* In modern times, we understand its ability to support liver tissue from the free-radical stress generated during liver metabolism.*

Simply stated, Milk Thistle seed has the following effects on the liver:

A. It is a powerful antioxidant
B. It promotes the liver's natural antioxidant system (that is the "mixed function oxidation system" including cytochrome P-450)*
C. It helps fight toxins, in part, by supporting cellular membrane stability*
D. It increases glutathione concentrations, supporting optimal liver function*

It is the combination of Milk Thistle's diverse actions that lend equal powerful support for the liver.*

It is interesting to note that the benefits of a number of 'spice cabinet' herbs used from ancient to modern times (such as Black Pepper, Ginger, Cayenne, Garlic, Turmeric, etc.) are being brought more fully to light by modern science. One of these kitchen herbs, Turmeric root, is traditionally recognized to support digestive and liver function.* A cousin of Ginger, Turmeric is a powerful antioxidant. It also demonstrates normalizing effects.* Like Milk Thistle, Turmeric aids liver function primarily by fighting free-radical oxidation generated during its metabolism.* Reducing this stress encourages normalized function of this metabolic organ.*

Schizandra berry is a valued kidney and male tonic.* Within this system it is often referred to as a 'king' or 'harmonizing' remedy, alluding to the broad-reaching influence of this small 'five flavored' berry. It is also deserving of great respect as an adaptogen (increasing non-specific resistance to stress).* In fact, the power of its adaptogenic influence has been compared to the highly regarded Siberian Ginseng. The depth of modern research compiled over the years on its use attests to Schizandra's validity. It has been suggested, specifically, to support function of the liver.* In China, compounds derived from Schizandra are being used for liver support with greater effect than the silymarins from the Milk Thistle.* In a similar manner as Milk Thistle, Schizandra may help support the liver's antioxidant systems while promoting the health of liver tissue.* Schizandra has also been suggested to increase liver cyclic AMP, which improves hormonal function at the cellular level.* This in turn results in an increase in overall function.* It simply cannot be overstated how valuable the Schizandra berry is to this formula.

Licorice root claims more than 3,000 years of use. Its early use to promote respiratory health is now being 'rediscovered' by modern scientific research. Licorice research suggests support for digestive health, among many reported effects.* Like Schizandra, it promotes cyclic AMP.* Perhaps most relevant to this formula, however, is the ability of Licorice to support healthy liver cells.* In addition, Licorice is able to promote the ability of the liver to handle toxins.* An entire book could be written on Licorice, for it is most definitely an extraordinary herb.

Chinese Skullcap has a long list of traditional applications to its credit, including use as a cleansing herb.* It is valued here as a powerful antioxidant. Similar to the other ingredients of this formula, Chinese Skullcap provides further support for the reduction of free-radical stress that is well-known to be generated at times of enhanced cleansing or challenges from external 'toxins'.*

Note: The intention of this information is to represent the traditional use of the individual botanicals found in these formulas and to inform the reader of any evolving scientific inquiry relevant to the formula's ingredients.