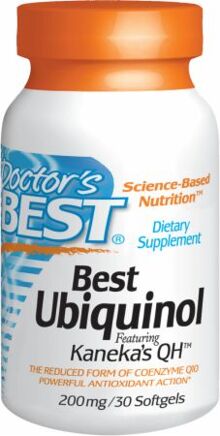 Go to Store
Best Ubiquinol featuring Kaneka QH contains the reduced form of coenzyme Q10. Both ubiquinol (CoQ10-H2) and ubiquinone (CoQ10) are metabolically active, and are found naturally in the body and in food sources. The two forms are interchangeable as the body appears to keep the reduced and oxidized forms in the 'total pool' at a constant ratio.1,2,3 Each form has unique roles to play in cells including antioxidant actions and enhancement of energy production in the mitochondria.* The commonly available supplement form of coenzyme Q10 has been the oxidized form (ubiquinone), as until recently the reduced form was difficult to manufacture due to its rapid oxidation in the air. New technology has allowed for the manufacturing of stable coenzyme Q10 in the reduced form.

The results from an animal study that compared the absorption of the two different forms, as well as a human study showing significant absorption of ubiquinol, together suggest that taking ubiquinol orally may offer improved bioavailability in individuals who have difficulty achieving high levels of this nutrient, such as aging adults or those concerned with nutrient absorption.4* Comparison studies of the two forms are now necessary in humans to confirm this idea, as well as determine the specific circumstances under which ubiquinol may be more beneficial.