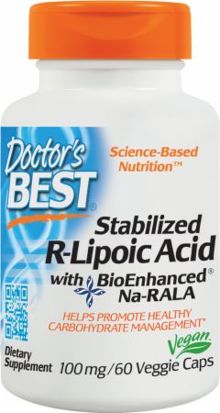 Go to Store
Quick Links to Deal PricesHow does this work and how do stores get listed? See our disclosure below to learn more.
Select Variation(s):
Size
Deal Price
180 Vcaps
$42.99
Go to Store
60 Vcaps
$15.49
Go to Store
Go to Store
Compare store prices
See all Doctor's Best Products on PricePlow
Ingredients

Best Stabilized R-Lipoic Acid contains BioEnhanced Na-RALA, the sodium salt of R-Lipoic acid (RLA). Unlike pure RLA, BioEnhanced Na-RALA is a stabilized form of RLA that won’t degrade at high temperatures, is more bioavailable than regular RLA and has no solvent residues.*

Lipoic acid (LA) plays an important role in glucose metabolism and energy production. Because it is soluble in both water and fat, LA is known as the “universal antioxidant.” LA occurs in two forms, designated as “R” and “S.” Studies suggest that RLA, the natural form, is more biologically active than the S form.