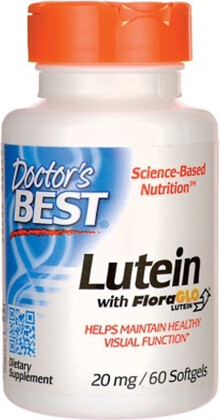 Go to Store
Quick Links to Deal PricesHow does this work and how do stores get listed? See our disclosure below to learn more.
Size
Deal Price
60 Softgels
$12.44
Go to Store
Go to Store
Compare store prices
See all Doctor's Best Products on PricePlow

Maintain Healthy Visual Function with Bioavailable IngredientsDoctor’s Best Free Lutein contains naturally derived ingredients to provide you with optimal support for visual function and protection from damaging free radicals. This unique formula contains FloraGLO Lutein, a carotenoid found in the human blood, naturally derived from marigold flowers. Lutein is found throughout the body, with especially high concentrations in the retina of human eyes. Lutein assists the body in scavenging damaging free radicals that can be found in tissues of the eye, skin, heart and lungs. In addition to Lutein, each daily serving contains Zeaxanthin, which supports Lutein in maintaining optimal eye health. This natural formula is a safe and effective way to maintain healthy visual function. With no added artificial ingredients, each tablet promotes visual function with bioavailable ingredients for optimal absorption and natural support. Just one softgel is all you need each day to provide maximum support for eyes and various tissues within your body.

Promotes the Scavenging of Free Radicals
This unique FloraGLO formula contains a healthy amount of Lutein to provide a multitude of benefits for your body. Along with its role in supporting visual health, lutein also assists in the process of scavenging free radicals, especially those found in tissues of the eye, heart, lungs and skin. This process of scavenging free radicals prevents oxidative stress and other harmful effects from taking place within the body.

Natural Sources for Safe Daily Support
Doctor’s Best utilizes safe, natural ingredients to provide you with bioavailable support each day. Along with FloraGLO and Zeaxanthin, this powerful formula utilizes natural ingredients such as safflower oil, yellow beeswax and soy lecithin to create each softgel. With no added ingredients besides those listed, you can feel safe and confident promoting visual health with Doctor’s Best.

One Softgel a Day Provides Maximum Benefits
Providing your body with healthy support for the eyes and tissues is easy with this Doctor’s Best Lutein formula. These powerful ingredients are conveniently packed into easy to consume softgels. Just one softgel each day is all you need to support visual health and promote the process of scavenging free radicals.

Best Free Lutein features FloraGLO, a purified free lutein manufactured according to a patented process that ensures a standardized and potent end product every time. FloraGLO is the exact same lutein molecule found naturally in foods such as spinach, collards, kale, and certain yellow-orange fruits & vegetables. The average American consumes only 2mg per day of lutein & zeaxanthin. Since the human body does not synthesize these carotenoids, we rely on food and dietary supplements if we wish to boost our tissue levels of these helpful compounds.

Over 20 studies have been completed in humans using FloraGLO Lutein, establishing a body of literature published in peer-reviewed journals or presented as abstracts at scientific conferences that confirms the efficacy and safety of this particular ingredient. Additionally, in vitro studies have pointed to multiple mechanisms by which FloraGLO confers benefit to eyes, skin, and overall health. No toxicological side effects were seen in clinical FloraGLO studies, providing particular confidence in this brand of lutein.

Supports Macular Pigment Density
Lutein and zeaxanthin are referred to as “the macular pigment” because they are the carotenoids found in the lens and macular region of the retina of the human eye. Since macular pigment is entirely of dietary origin, it is not surprising that epidemiologic research and the majority of clinical studies show that higher intakes of these carotenoids are associated with a superior level of eye health. Research has been conducted in humans to determine whether taking supplemental lutein can actually increase the density of the carotenoid pigments present in the macula; macular density is a primary measure of retinal health. In one such study of eight individuals, researchers used complex tools to estimate macular pigment density prior to having each individual take 10mg of lutein daily for 12 weeks. Plasma lutein concentrations were measured at 4-week intervals, and during the course of the study they increased five-fold from baseline measurements. It was also shown that macular pigment density increased by an average of 5.3% after 4 weeks due to increased deposition of lutein in optical tissues.

In a larger study of 376 individuals (ages 18–75), blood nutrient levels were analyzed alongside lens optical density (LOD) and macular pigment optical density (MPOD) measurements to find out which nutrients may be beneficial for these markers of eye health as we age. MPOD is associated with blood levels of lutein and can be altered with dietary intake of xanthophylls. Due to the inverse relationship found between MPOD and LOD, the researchers determined that lutein and zeaxanthin intake supports maintenance of healthy eye lenses with age.

In the Lutein Antioxidant Supplementation Trial (also known as the Veterans LAST study), the investigators were interested in the effect of lutein—alone and in combination with additional nutrients—on the structure and function of the macular region of the retina. In this doubleblind, placebo-controlled trial, 90 subjects were randomized into three groups, receiving either 10mg lutein, 10mg lutein plus a multivitamin/mineral formulation, or placebo for 1 year. In both the lutein and the lutein plus other nutrients groups, significant change was noted in average eye macular pigment optical density, visual acuity, contrast sensitivity, and glare recovery. No improvements were noted in the placebo group.

Aside from its role as the macular pigment, lutein has also been shown to benefit the eyes through its excellent antioxidant capacity. Lutein was shown to have significantly higher photoprotective activity than alpha-tocopherol (vitamin E), demonstrating its prowess as a highpowered antioxidant. In vitro evidence for the free radical scavenging activity of lutein is found in studies of its effects on human lens epithelial cells. In one such study, cell cultures were exposed to ultraviolet (UV) light after pretreatment with lutein or alpha-tocopherol. Both nutrients were found to reduce UV-induced damage to lens epithelial cells. However, Lutein has also been found to be an effective filter of “blue light,” another daily source of oxidative stress on the polyunsaturated fatty acidenriched photoreceptors of our eyes.

Promotes Graceful Aging of the Skin
Premature aging of the skin can be avoided if proper measures are taken. In 1986 the term “photoaging” was coined to describe unfavorable effects of ultraviolet (UV) rays on skin. The UV radiation from sunlight is absorbed by skin molecules, leading to reactive oxygen species (ROS) that can wreak havoc among cellular components like cell walls and membranes, mitochondria, and DNA.11 In preclinical research investigating the interactions between lutein, skin, and UV light, FloraGLO Lutein was orally administered to mice. In one such study, mice fed a diet enriched with FloraGLO experienced higher skin lutein levels, which afforded the mice superior photoprotection and a reduction of ROS in the skin. In a similar study, mice fed a diet enriched with FloraGLO experienced a more balanced acute response to UV radiation. In humans, lutein is naturally present throughout skin, providing specialized antioxidant support. In 2007, a doubleblind, placebo-controlled study demonstrated the positive effects of lutein on five skin health parameters: hydration, elasticity, surface lipids, photoprotective activity, and lipid peroxidation. Forty female subjects were randomized into four groups, with an attempt to balance age and skin type of the individuals amongst groups. Each group received either an active oral treatment with a placebo topical treatment, a placebo oral treatment with an active topical treatment, both active treatments, or both placebo treatments for 12 weeks. Oral administration was in the form of FloraGLO Lutein softgels that provided 5mg lutein and 0.3mg zeaxanthin, taken twice daily for a total of 10mg lutein and 0.6mg zeaxanthin per day. Statistically significant improvements were seen in all lutein groups — compared to the group receiving only placebos—among all five parameters tested. Oral administration of lutein conferred superior photoprotective activity (as measured by skin surface redness after exposure to ultraviolet light) and prevention of lipid peroxidation (as indicated by levels of malondialdehyde in skin lipids after exposure to ultraviolet light) than either topical lutein or placebo. While previous research had shown that antioxidant supplementation that included 3mg of lutein daily was photoprotective, this more recent study was the first to demonstrate the benefits of lutein alone.

Whole Body Antioxidant Support
Most of the beneficial effects of xanthophylls are ascribed to their ability to quench reactive oxygen species and scavenge other free radicals that are either taken in from the environment or generated internally by natural metabolic processes. The antioxidant edge provided by lutein and zeaxanthin has sparked investigatory interest in what role they may play in areas of health beyond eye and skin care. Evidence from epidemiologic studies and various experimental trials suggests that lutein also helps in the maintenance of a healthy cardiovascular system, in part by countering oxidative stress experienced by blood vessel walls. Additionally, animal and large-scale observational studies suggest that lutein and zeaxanthin are associated with the health of particular organs, including the lungs and colon.

About Doctor's Best
The dedicated, knowledgeable people who get Doctor's Best products into the hands of consumers are vital to us. You know about our commitment to quality, effectiveness, and innovation, and you do an outstanding job of communicating those advantages. You're also our eyes and ears in the marketplace, so we encourage you to share your ideas and suggestions with us. We appreciate the support you've given Doctor's Best!

And we know you need our support in return. That's why this site was created, to provide you and your customers with the information you need. We've also developed marketing materials you can use to build your business. At Doctor's Best, we do more than stock shelves with excellent products. We believe in giving you the tools you need to create the sales velocity you desire!