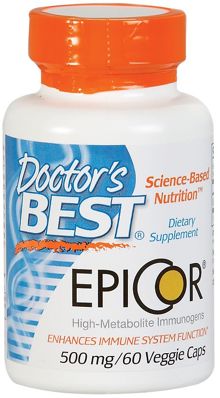 Go to Store
Quick Links to Deal PricesHow does this work and how do stores get listed? See our disclosure below to learn more.
Size
Deal Price
60 Vcaps
$16.57
Go to Store
Go to Store
Compare store prices
See all Doctor's Best Products on PricePlow
Ingredients

Epicor (500mg) Description from Doctor's Best
Epicor is a natural immune-supportive compound that fits into the unique category of being a high metabolite immunogen.* EpiCor is a nutritive dried yeast fermentate that supports cellular metabolism and modulates immune function.* It is derived from the yeast Saccharomyces cerevisiae, a non-pathogenic yeast commonly used in baking and brewing. In vitro laboratory data has shown that EpiCor beneficially influences cellular processes that impact immune health. *

EpiCor is a unique and novel dietary supplement used for support of immune health, with a fascinating history of discovery. In 1943, a company in Cedar Rapids, Iowa called Diamond V Mills, Inc. began manufacturing and selling a fermentation product from the yeast Saccharomyces cerevisiae, the same yeast used in bread and beer making. The product was and still is used as an additive for animal feed to help improve digestion as well as overall health in animals. It has been on the market for over 60 years.

Interestingly, when the company became self-insured, they became aware of unusually low rates of illness in employees that worked in the manufacturing plant for this animal product. This led to very low increases in their insurance premiums over the years compared to other companies, saving them quite a lot of money. Hence they began to investigate what might be the cause of the healthfulness of the employees at the fermentation plant.

Contains nothing other than listed ingredients.

Manufacturer's Directions
Suggested Adult Use: Take one capsule daily with or without food.