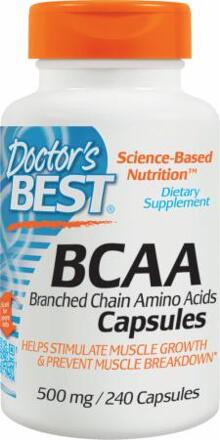 Go to Store
Quick Links to Deal PricesHow does this work and how do stores get listed? See our disclosure below to learn more.
Size
Deal Price
300 Grams
$15.99
Go to Store
Go to Store
Compare store prices
See all Doctor's Best Products on PricePlow
Ingredients

Another major mechanism by which BCAAs can increase muscle mass is by attenuating muscle breakdown as a result of exercise. Muscle proteolysis, or breakdown, has been shown to be suppressed simply with BCAA supplementation, independent of any action by insulin. Serum BCAA levels can be depleted and BCAA catabolism can be increased as a result of intense exercise. The best way to combat the muscle breakdown, muscle fatigue, depletion of serum BCAAs and the delayed on-set muscle soreness from intense exercise is to supplement with BCAAs.*

In a study that examined two groups performing squat exercises over three days and received either carbohydrates or BCAAs, at a dosage of 5.5 grams. The group that received the BCAA supplementation maintained their performance throughout the study better and had less muscle soreness than the group that received the carbohydrate supplementation. In a study comparing elite competitive wrestlers on a hypo caloric diet, the group that received BCAAs, were able to maintain their high level of performance while inducing significant loss of body fat, as compared to groups receiving either high or low amounts of protein and the control group.*

Endurance performance was significantly improved in runners that received BCAA supplementation when trained participants competed in a 30-km cross-country race or a marathon. The runners that received BCAAs had more significant improvements in run times and less mental fatigue after the races compared to the placebo groups. Drinking BCAAs has been shown to enhance exercise capacity and increase lipid oxidation in individuals that have depleted muscle glycogen stores as a result of exhaustive exercise.

Branch Chained Amino Acids are an essential part of a healthy diet. BCAA supplementation, in combination with exercise, has been shown to improve sports performance through a variety of mechanisms. BCAAs have also been shown to help in improving body composition. The recommended dosage for Doctor’s Best Branch Chained Amino Acids is 5 grams daily.*