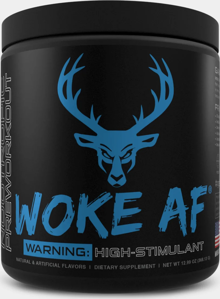 Go to Store
Quick Links to Deal PricesHow does this work and how do stores get listed? See our disclosure below to learn more.
Select Variation(s):
Size
Deal Price
30 Servings
$38.99
Go to Store
40 Servings
$55.99
Go to Store
Go to Store
Compare store prices
See all DAS Labs Products on PricePlow
Ingredients

Let's repeat something: WOKE AF is not for beginners

Glad we’ve cleared that up. Beginners, we mean no offense. We tell you this because we care about your safety (and the safety of the weights). If you’re still considering taking WOKE AF before you’re ready, we cannot be held liable should they find you sitting atop a pull-up bar singing praise to the Buck.*

WOKE AF is our highest stimulant pre-workout. It’s for the insane, the insatiable, and those who refuse to accept anything less than reaching energy levels over 9,000. It’s formulated with clinically studied ingredients (at their clinical doses) to help deliver pump, endurance, focus, and performance. But that’s just the quality you expect from any BUCKED UP product. What’s truly astonishing about WOKE AF is the combination of stimulants.*

Think of your energy like a rocket. Caffeine goes off first, sending you skyward. Synephrine and Dendrobium kick into gear next; breaking atmosphere, hanging out in space, looking down on all the mere mortals -- how small they all look from the “heavens.”*

Many high stimulant pre-workouts use ingredients that burst too hard & fast, and cause engine failure or premature fuel store depletion. Not us. WOKE AF is formulated to shoot you into space, let you soar for hours, and still provide you with a nice, soft landing. In other words, no “Houston, we have a problem,” and no crash.*

You can trust WOKE AF to help with*