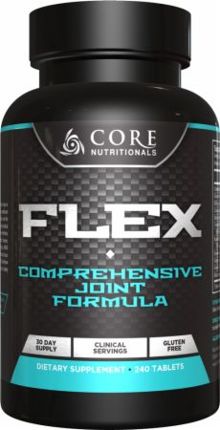 Go to Store
Quick Links to Deal PricesHow does this work and how do stores get listed? See our disclosure below to learn more.
Select Variation(s):
Size
Deal Price
240 Tablets
$28.90
Go to Store
30 Servings
$39.99
Go to Store
Go to Store
Compare store prices
See all Core Nutritionals Products on PricePlow
Ingredients

Don’t leave your recovery to chance.

Core FLEX is an ultra-potent combination of 11 clinical ingredients, crafted to ensure the maintenance of strong and healthy tendons and ligaments. Best of all, its all-in-one blend combines the efficacy of single ingredient products, with the synergy of an entire joint product lineup.

We’ve all been there. You have a bit of cashed saved up, and a hard choice to make: do you buy the new, shiny toy, or fix that sort of irritating sound your engine is making? I mean, sure, maybe the engine breaks down, but that’s only a possibility – you will most certainly enjoy that new toy! Am I right?

Wrong. Just like a vehicle, our bodies are exposed to the constant wear and tear of demanding daily use, a fact especially true of athletes. As we put more and more weight on the bar, run faster and further, and push our bodies to the limit, our joints, tendons, and ligaments require regular maintenance to keep them in optimal health. We need to fix that sort of irritating sound our engine is making, in other words.

Core FLEX provides a superior way to do so. Core FLEX is an ultra-potent combination of 11 ingredients, verified by clinical research and included in clinical serving sizes, crafted to ensure the maintenance of strong and healthy tendons and ligaments. Best of all, Core FLEX’s all-in-one blend combines the efficacy of single ingredient products, with the synergy of an entire joint product lineup.

Chondroitin and Glucosamine are substances found naturally in the body, and in particular, in and around the cartilage and other connective tissues.Glucosamine falls within a class of compounds known as amino sugar, and is a precursor to a molecule called glycosaminoglycan. The human body produces and distributes both of these compounds as critical components in the production of cartilage and other connective tissue . It also aids in lubricating and providing thickness to the cartilage around damaged joints. Chondroitin sulfate is a type of glycosaminoglycan and complex carbohydrate rich in sulfur, and is a relative of glucosamine. Chondroitin is one of the major constituents of cartilage, not only providing structure and stability, but also water for the purpose of lubrication.

MSM is a naturally occurring, organosulfur molecule that can be synthesized both naturally and synthetically from DSMO. While the majority of MSM present in the human body is ingested – either deliberately or accidentally – the compound does have a natural presence in certain tissues and fluids in the body, including cerebrospinal fluid. MSM appears to assist healthy biochemical communication between cells that may assist joint flexibility and mobility. While still emerging, certain data on MSM appears to show a promising role for the compound in the maintenance of proper joint function. Several studies demonstrate joint function increases on the WOMAC scale ranging from 20-35%, while animal data suggests equally significant results. Though not every trial on MSM reveals such significant results, a meta-analysis conducted in 2011 found that the overwhelming majority of clinical MSM trials featured function improvements over placebo.

Cissus quadrangularis (CQ) is a plant with a long history of use in traditional and folk medicinal systems, including thousands of years of documented use in the Siddha and Ayurvedic traditions. While the specific use of Cissus in these systems varied, the most common traditional preparations related to analgesia, general tonics, and bone fracture healing. More recent research has developed physiological explanations for CQ’s traditional efficacy, including the reduction of pro-inflammatory cytokines, modulation of the glucocorticoid system (in animal trials), and the proliferation of osteoblast (bone-forming cell) DNA.

Specific to bone formation, there is strong data to suggest that CQ increases the accumulation of compounds known as mucopolysaccharides – long chain sugar molecules that precede mineralization in the process of bone formation. Think of these compounds sort of like the wet newspaper before it becomes paper mache. As stated, separate research also suggests that extracts of CQ stimulated osteoblastogenesis, the process of forming bone cells.

Black cherry extract contains a number of beneficial compounds, including high levels of anthocyanin – an extremely potent anti-inflammatory compound which some animal evidence has shown plays a role in the maintenance of articular jointsIt is rich in antioxidants and catechins, chlorogenic acid, and flavonal glycoside, and has been used to support healthy uric acid levels typically associated with complete joint health.

Tumeric is a root endemic to certain regions of Southeast Asia and India, and has been a staple in the Siddha traditional medicinal system for thousands of years. Tumeric is noted in Siddha texts for various uses, including as an ancient equivalent of an anti-microbial agent.

More recently, numerous studies seem to suggest that its primary bioactive constituent, curcumin, powerfully inhibits the enzymes that synthesize inflammatory compounds such as prostaglandins and leukotrienes. In particular, basic research and molecular studies have now firmly established curcumin’s ability to dose-dependently and potently inhibit a transcription factor known as NF–kB – a molecule involved in the proliferation of pro-inflammatory cytokines, soft tissue destruction, and autoimmune responses.

Though Tumeric contains approximately 5% curcumin by weight, we have used a highly standardized extract of 95% - recognizing that the wealth of research on curcumin demands that it be included in clinical serving sizes.

Boswellia is a tree resin extract that is a traditional part of Indian medicine. In modern clinical trials the active agenct, boswellic acid, has been found to inhibit the production of pro-inflammatory leukotrienes. Similarly to curcumin, boswellic acids have demonstrated a significant attenuation of NF-kB production in various animal and in vitro assays.

Bromelain is a collection of protein-digesting enzymes found in pineapple juice and in the stem of pineapple plants. It has been shown to have a myriad of health benefits including speed of recovery, antioxidant properties, and assisting cardiovascular and circulatory health. The mechanism of the anti-inflammatory activity is not very well understood, but like curcumin and boswellia it appears to support inflammatory marker balance. Numerous studies have shown bromelain’s ability to assist and speed recovery time following various health related procedures.

Vitamin C is not only a powerful antioxidant, but also supports a healthy immune system, protects cells from oxidized particles and free radicals, and assists other physiological functions. A major study by the University of California at Berkeley found that supplementing with 500 milligrams of Vitamin C (the daily serving contained in Core FLEX) led to a 24% reduction in levels of C-reactive protein, a consistent marker of inflammation. In conjunction with the other ingredients, it is important component of strong joints and overall health.

Vitamin D3 is an essential hormone precursor that plays a vital role in many metabolic functions, including bone health, , immune and cardiovascular health, muscle protein synthesis, and weight management. Although some foods contain Vitamin D3, the human body generates most of its Vitamin D3 needs from the skin through regular exposure to sunlight. Healthy and normal Vitamin D3 levels are essential to maintaining numerous bodily processes, including regulating the pro-inflammatory responses of joints and connective tissues to damage.

Piperine a black pepper extract, is included because it dramatically increases the bioavailability of curcuminoids (see above). Without piperine, the serum concentration and absorption rates of the active agents in curcumin would be significantly reduced. Piperine facilities the full effects of the curcumin.