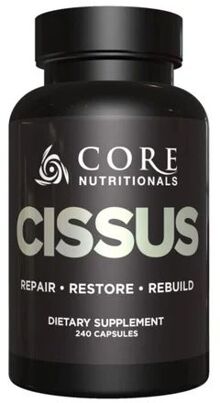 Go to Store
Quick Links to Deal PricesHow does this work and how do stores get listed? See our disclosure below to learn more.
Size
Deal Price
240 Capsules
$23.99
Go to Store
Go to Store
Compare store prices
See all Core Nutritionals Products on PricePlow

Cissus quadrangularis (CQ) is a plant with a long history of use in traditional and folk medicinal systems, including thousands of years of documented use in the Siddha and Ayurvedic traditions. While the specific use of Cissus in these systems varied, the most common traditional preparations related to analgesia, general tonics, and bone fracture healing.

More recent research has developed physiological explanations for CQ’s traditional efficacy, including the reduction of pro-inflammatory cytokines, modulation of the glucocorticoid system (in animal trials), and the proliferation of osteoblast (bone-forming cell) DNA.

Specific to bone formation, there is strong data to suggest that CQ increases the accumulation of compounds known as mucopolysaccharides – long chain sugar molecules that precede mineralization in the process of bone formation. Think of these compounds sort of like the wet newspaper before it becomes paper mache. As stated, separate research also suggests that extracts of CQ stimulated osteoblastogenesis, the process of forming bone cells.