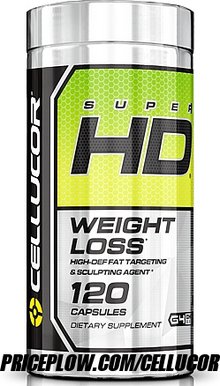 Note: this page contains both the Super HD capsules and the Super HD powdered drink mix formula (shown in "30 servings"). The ingredient profiles are similar, but not identical. We are major fans of both of them.

Featuring an all-natural ingredient profile, Cellucor is a top performing supplement company with their flagship fat-burning supplement, Super HD. The ingredients don't force you to lose weight, but rather, give you energy and create well-developed muscles.

Super HD is a powerful supplement that has a high-definition, fat-targeting and sculpting agent. This means that you won't just lose fat, your body can also increase muscle size. 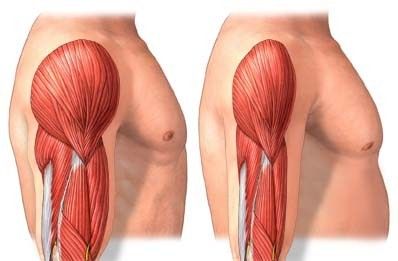 True fat loss, as promoted by Cellucor Super HD, doesn't just target fat (adipose) tissue. The supplement also helps the body use fat as energy, which can intensify your workouts.

As your body learns to make use of fat, you'll find yourself controlling your appetite better. Instead of craving junk food and other empty calories, your body will crave foods that contain healthier nutrients.

One of the reasons why Super HD is effective is because of its vitamin content.

Cellucor follows it up with a powerful Nootropic & CNS Support Blend. You need to make use of the released fat in the bloodstream or else it will just get re-deposited in another part of the body.

Caffeine Anhydrous: The first ingredient under the Nootropic & CNS Blend is Caffeine anhydrous. It's a natural ingredient derived from coffee. Centuries of use and many studies confirm the benefits of caffeine as a mental stimulant and fat burning agent.

Individuals sensitive to stimulants, including coffee addicts, might have a negative reaction, even to the relatively low dosage of caffeine in Cellucor Super HD. If you take any supplements containing caffeine, it's highly recommended that you avoid food and beverages that also contain stimulants, like coffee-based drinks, chocolate, candy, jerky and other foods with an "energy booster" label.

Toothed Clubmoss (1% Huperzine A): One disadvantage with most fat burners is that it can make the body burn too much glucose, an energy source, leaving just a small amount for the brain.

To avoid decreased mental alertness, Cellucor added Toothed Clubmoss in Super HD. It's an acetylcholinesterase inhibitor that increases acetylcholine. This will allow you to stay mentally alert and improve fine and gross motor movement.

The iFAS503: This mini-blend is a combination of Super HD ingredients that target the fatty acid synthase enzyme (FAS). FAS inhibitors prohibit the growth of new fat cells and deposits.

Camellia Sinensis Extract: Green tea, or Camellia sinensis, contain a variety of active substances. One of them is Theophylline, which increases metabolic activity. When metabolism increases, the body requires energy. The energy can come from fat since other ingredients in Super HD work hard to make the adipose tissue release its contents.

Chinese Mistletoe Extract: Another FAS inhibitor, this is the third iFAS503 ingredient that helps burn fat and prevent the creation of fat cells.

While it's hard to get rid of fat deposits in fat cells, it's harder to get rid of fat cells. Once a fat cell is created, it's there for a long time. After rapid weight loss, remaining fat cells cause skin sags and flaps. Chinese mistletoe extract may help prevent this effect.

Rhodiola Rosea: Burning fat and working out are considered stressors.

Too much stress can trigger the production of the hormone cortisol, which isn't really a bad guy. At low levels it actually helps burn fat and destroy fat cells.

As an added bonus, the ingredient in Super HD also helps reduce fatigue. Prolonged fatigue is a stressor and can hinder gains in muscle mass.

Pausinystalia Yohimbe Extract: Pausinystalia yohimbe is the source of purified Yohimbine HCl. Instead of getting only the potentially dangerous Yohimbine HCl, Cellucor Super HD focused on whole Yohimbe bark extract.

It contains relatively low levels of Yohimbine. Just enough to trigger a metabolic response that is intensified by Rauwolscine. Yohimbe bark extract also contains several other biologically beneficial ingredients. Yohimbe bark has been used in ancient medicine and poses few side effects at dosages found in Super HD.

Amla Fruit: Indian gooseberry, or amla fruit, is a great source of vitamin C. It has several central nervous system benefits, and the same benefits as Chinese mistletoe and toothed clubmoss.

Red pepper Fruit (2% capasaicinoids) Capsimax: Capsaicinoids are intense thermogenic ingredients that can raise metabolism and body temperature. To limit its irritating effect on the stomach, Super HD uses Capsimax, which coats capsaicinoids and releases it into the body.

This is a concentrated blend that supports niacin, vitamins B6 and B12 in Super HD.

Niacinamide: Another form of niacin but with different benefits, many supplements use niacinamide because it doesn't cause niacin flushing. In this form, thanks to its anxiolytic effect, niacinamide can help reduce stress. It's also know for activating sirtuins, which has been connected to playing a role in reversing Alzheiner's disease.

Cyanocobalamin, Methylcobalamin and Coenzyme B12: These three vitamins focus on red blood cell production. The health of red blood cells guarantees a steady supply of oxygen to the muscles.

Pyridoxal-5-Phosphate: P5P helps reduce glycation in the body. Glycation is thought to be one cause of aging. This happens when the body is in extreme metabolism. Free radicals are generated during glycation, which eventually damages muscle cells and prevents them from regenerating.

With an impressive lineup of ingredients, Cellucor Super HD is a great supplement for your stack. It doubles as a fat burning agent and pre workout supplement.