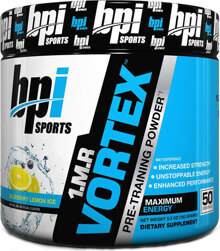 Go to Store
Quick Links to Deal PricesHow does this work and how do stores get listed? See our disclosure below to learn more.
Select Variation(s):
Size
Deal Price
50 Servings
Buy 1 Get 1 FREE
$31.99
BOGO
Go to Store
Go to Store
Compare store prices
See all BPI Sports Products on PricePlow
Ingredients

1.M.R. Vortex (short for "One More Rep") is a unique product formulated with cutting edge ingredients. The manufacturer, BPI Sports, makes bold statements such as, "There is nothing else out there that will ever make you feel this way — faster, stronger, harder than anything else you've ever tried."[1] Making such claims, they really set the bar high.

This is the latest formula in the 1MR franchise - released in early 2014 - which marks the 3rd or 4th revision of the product.

We gotta be honest with you. It tasted like cough medicine. But that was completely forgotten after the workout began, and the pumps and focus fired up! See Mike and CJ's review below:

While a number of the ingredients in 1.M.R. Vortex have been thoroughly studied and proven effective, there is an insignificant amount of evidence backing some of the key components of the supplement. We can at least provide you with some general information pertaining to these ingredients.

There are some newcomer ingredients here, which have never been used in this role as a fitness supplement. Oftentimes, "antioxidant-like" ingredients work well for amplifying nitric oxide levels and pumps, but we can't speculate. The success of this formula rests largely upon the effectiveness of the formula, specifically in a fitness capacity. We can at least provide you with some general information about BPI Sports' 1.M.R. Vortex and these new ingredients.

The company included niacin in the form of nicotinic acid, at 20mg per serving, which is equivalent to 100% of the recommended daily value. Niacin has been shown to improve circulation and nervous system function, as well as aid in the formation of stress and sex related hormones.[2]

Caffeine appears in the form of caffeine anhydrous. This popular stimulant is a key ingredient that is commonly used in a number of pre-workout products. It has undoubtedly gained its popularity due to its profound effect as a stimulant, but it has also proven useful as a fat loss agent and appetite suppressant.[3, 4, 5]

Unfortunately, we have no clue how much caffeine is in each scoop, which will make dosing this product a bit of a challenge — for first timers and old pros.

Glycerol is present in the form of glycerol monostearate. Most studies pertaining to athletic performance and general fitness show that glycerol acts as a hyper hydration agent by increasing water retention and delaying dehydration.[6, 7]

White leadwort, also known as plumbago, is a root extract from an herbaceous plant. Several studies on the phytochemical plumbagin demonstrate anti-inflammatory and antioxidant benefits.[8-12]

Studies of Indigofera pulchra are extremely limited. Two, in particular, show that the plant has antioxidant and anti-inflammatory properties.[13,14]

Securinega suffruticosa leaf and root extract is another ingredient that lacks significant evidence supporting any major fitness related benefits, however the plant contains an alkaloid known as securinine, which is a GABA receptor antagonist. GABA is known as an inhibitory neurotransmitter (meaning that it inhibits neurons from firing in the brain). By blocking the action of GABA, securinine acts vicariously as a central nervous system stimulant.[15,16]

Yohimbe is a plant that has been documented to effectively treat male impotence.[17,18] Studies also provide evidence that the plant plays a role in promoting fat loss.[19, 20] 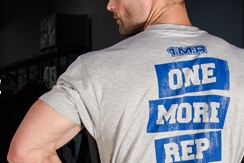 While a number of the components present in this blend are lacking adequate evidence to prove their efficacy, the same can be said for a number of more popular ingredients, even though they're relatively new to the supplement industry. And despite a lack of scientific evidence, 1.M.R Vortex is a popular pre-workout supplement that generally gets good reviews from its users.

BPI Sports recommends using this product on training days only. Consume one serving (1 scoop) 15 to 30 minutes prior to training. They suggest blending it with 6 oz. to 8 oz. of cold water or a beverage of your choice.

Too much caffeine may cause unwanted side effects. Since there's no way of knowing how much of the stimulant is added to 1.M.R Vortex, a good rule of thumb is to limit consumption of caffeinated beverages and supplements while using this pre-workout. Additionally, there is a considerable amount of niacin, a B vitamin. Niacin may cause minor side effects, such as temporary flushing, skin reddening, tingling, and sensations of warmth.[1]

Do not exceed one serving of 1.M.R Vortex per training day. Avoid consumption of food and protein shakes within an hour of use. Taking the product with food, or on a full stomach, may interfere with and diminish its effectiveness. This product may cause sleeplessness if taken within four hours of bedtime. Because the levels of caffeine are not noted in the proprietary blend, we warn against any additional caffeine intake.