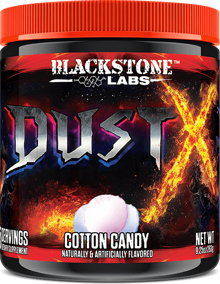 Go to Store
Quick Links to Deal PricesHow does this work and how do stores get listed? See our disclosure below to learn more.
Select Variation(s):
Size
Deal Price
25 Servings
$49.99
Go to Store
Go to Store
Compare store prices

Blackstone Labs has brought back the newly formulated and most potent pre-workout yet: Dust X This product contains the most powerful nootropics and stimulants to keep you laser focused through your training. The innovative and aggressive team at Blackstone Labs has pushed the boundaries once again. This is not a beginner's supplement, and only serious and experienced people should take it.

WARNING: This is the extreme formula of Angel Dust and Dust Extreme. It is not for beginners to pre-workout supplements.

Not only does this stuff work, the flavors are amazing. So good you will be looking forward to drinking them all day long!

Should I Use Dust V2 or Dust X?

These two products are very similar, but Dust X really pushes you with the added stimulants. Dust V2 is more accessible for anybody who works out, while Dust X should only be used by experienced users. They are both stimulant pre-workouts. The caffeine content of the new extreme formula is 300mg as well. Look at the tabs on this page to see more reviews of the new formula from users.

Agmatine Sulfate (1g)promotes dense, long-lasting pumps and NO production by inhibiting the enzyme that breaks down arginine in the body (arginase). Agmatine works in conjunction with Citrulline Malate to provide a constant and powerful surge in nitric oxide all workout long.

Phenylethylamine (500mg)acts as a central nervous system stimulant that increases levels of many of the "happy hormones", such as dopamine and serotonin. Phenylethylamine (PEA) crosses the blood-brain barrier where it exerts a strong, and rapid, spike in mood and overall well-being.

Caffeine Anhydrous (300mg)provides the immediate kick in the ass you need to get in the gym and get to work! Caffeine anhydrous is fast-absorbing and highly-stimulating resulting in demonstrably greater energy, focus, and motivation.

2-aminoisoheptane (150mg)is an aggressive psychostimulant. Also known as DMHA, 2-aminoisoheptane is an aliphatic amine that promotes laser focus, intense energy, and relentless drive. You could say it's the "heir apparent" to the king of stims.

Higenamine (75mg)activates the "fight or flight" by increasing production of noradrenaline (norepinephrine). Higenamine enhances fat burning during a workout and adds that "little something extra" that missing from all other pre-workouts.

Huperzine A (300mcg)increases acetylcholine production indirectly by inhibiting acetylcholinesterase, the enzyme that breaks down acetylcholine. Huperzine works together with DMAE to promote long-lasting focus, concentration, and alertness during training.

On training days, Blackstone Labs recommends that you take one scoop 30 minutes before your workout. On non-training days, take one scoop in the morning. As mentioned above, this product is extremely potent, so new users should assess their tolerance starting with half a scoop. Do not exceed one scoop per day. You shouldn't take Dust X for longer than 8 weeks. At the end of a cycle, take 4 weeks off before starting again.

* DUE TO SOME INGREDIENTS, CLUMPING MAY OCCUR