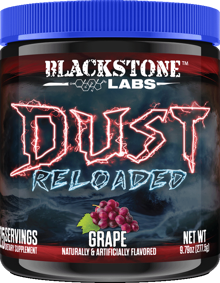 Go to Store
Quick Links to Deal PricesHow does this work and how do stores get listed? See our disclosure below to learn more.
Select Variation(s):
Size
Deal Price
25 Servings
$36.99
Go to Store
Go to Store
Compare store prices

Go to Store
Dust Reloaded is a high stim pre-workout that magnifies gym performance by increasing energy levels, and focus. This addition to the Dust line of Pre-workouts comes in three great flavors with more to come soon.

Citrulline Silicate is primarily known to delay the onset of fatigue during high-intensity training and as a precursor to nitric oxide, allowing for better pumps while training. Citrulline aids in recovery and helps to alleviate soreness.

L-Taurine increases concentration and alertness and can improve your overall sense of well-being.

L-Norvaline is a form of the branched chain amino acid known as Valine, and while showing some of the nutritional benefits of Valine, L-Norvaline has also been suggested to help support circulation and cardiovascular efficiency

Yohimbine HCL works by widening blood vessels and increasing blood flow in the body. It is also thought to increase fatty acid mobilization.

Di-Caffeine Malate generates the same energy and focus as caffeine, but with less stress on the stomach.

Staeroyl Vanillylamide enhances adrenaline and noradrenaline, hormones responsible for the activation of sympathetic bodily responses including metabolism. It promotes the burning of brown fat in the adipose tissues.