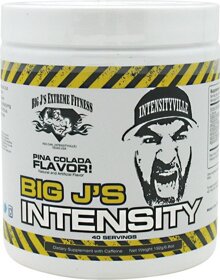 Big Intensity is a hard-hitting pre-workout. It’s designed for people who need extreme energy and focus during INTENSE workouts. Big Intensity combines powerful stimulants and intense focus ingredients. You will feel psyched, making gains each time you hit the gym.*

When in the gym, many individuals strive for an intense pump. The kind where it feels like your skin is going to tear. L-Citrulline can help you achieve such a pump. L-Citrulline has the ability to increase nitric oxide production, allowing your blood vessels to expand and dilate. This ingredient in itself has many benefits such as aiding in shuttling nutrients to the working muscles, promoting healthy energy levels, and improving blood flow. In addition, L-Citrulline can help prevent inflammation and muscle wasting due to oxidative stress (Ham et al., 2015). Supplementing with this ingredient has been proven to be safe and has also been used by patients suffering from erectile dysfunction as an alternative treatment method (Cormio et al., 2011).

Focus is a crucial, yet highly underrated, aspect of training. Without it, you might as well not even be at the gym. But when you are focused, the quality and effectiveness of your workouts is amplified 100-fold. That’s where L-Tyrosine comes in. This amino acid enhances production of the dopamine, adrenaline (epinephrine), and noradrenaline (norepinephrine), three important neurotransmitters key to focus, attention, and alertness. Tyrosine also exerts some anti-stress benefits when consumed prior to training, helping you stay in the zone no matter how long you’re battling the iron.

N-acetyl cysteine (NAC) is a derivative of the non-essential amino acid cysteine. NAC is one of the most powerful ingredients to scavenge free radicals. NAC helps replenish glutathione, a critical component of the body's defense system. It is essential in maintaining liver health as well as helping overall health in many other ways. By preventing free-radical buildup, this amino acid with an acetyl group attached accentuates the sodium/potassium pump, which allows you to train harder and longer. In once study done at the University of Kentucky, subjects performed 30% longer when they took NAC preworkout. NAC can also boost the pump increasing the activity of nitric oxide in the body when combined with the 6g of L-Citrulline in INTENSITY and can even help you burn more fat!

One ingredient you will find in many pre-workouts on the market today is caffeine. This particular ingredient has been used to improve performance for more than 15 years – helping give athletes and the general population alike, the ability to improve their performance and increase their energy levels. While the dosages vary and are dependent on the individuals’ tolerance to simulants, the overall consensus is that caffeine can improve reaction time, logical reasoning, and vigilance (Kamimori et al., 2015). In addition, researchers have found that caffeine can also aid in enhancing long-term memory (Borota et al., 2014).

Theobromine is commonly found in chocolate (cacao). The energy boost you get from chocolate is actually coming from Theobromine itself – dark chocolate having the highest concentrations. Along with the energy boost, expect to feel nootropic effects where you attain a feeling of relaxation (Mitchell et al., 2011). Due to the vasodilation properties found in Theobromine (Martinez-Pinilla et al., 2015), it can also help attain a pump during workouts. The dilation of blood vessels can help increase blood flow to working muscles as well as transport nutrients more easily throughout the body. In addition, Theobromine has a diuretic effect, pulling water out of the body (Eteng et al., 2006). Lastly, as an added bonus, Theobromine may help with weight reduction as well thanks to its ability to reduce hunger and help prevent overeating (Khazan et al., 2014).

This specifically formulated version of caffeine is an ionic bond of caffeine and malic acid which can increase mental focus and energy (Infinergy). In addition, Infinergy increases thermogenesis which can aid in weight loss. With this addition to any pre-workout and you can not only attain the energy needed to grind through the most grueling workout, but it can also help you burn fat and drop unwanted body weight.

Coffee Bean Extract is high in Chlorogenic Acid. This ingredient has been demonstrated to help increase energy as a natural source of caffeine as well as aid in fat loss and act as an antioxidant, which will work alongside NAC to provide for an amazing pump.

An ingredient that has been around for quite some time and included in many weight loss supplements is Yohimbine HCl. As a weight management ingredient, Yohimbine HCl is a workhorse. It can aid in dropping body fat without affecting lean muscle mass or even athletic performance (Ostojic, 2006). Yohimbine HCl can also help reduce stress and improve cognition (Hoffmann et al., 2014). As if that wasn’t enough, men specifically can benefit from the use of Yohimbine HCl thanks to it’s libido boosting properties (Tam et al., 2001).

BIG is proud to support our military and first responders! One dollar of every BIG product sold is donated to the Semper Fi Fund!

The Semper Fi Fund provides immediate financial assistance and lifetime support to post 9/11 combat wounded, critically ill and catastrophically injured members of all branches of the U.S. Armed Forces and their families. The Semper Fi Fund delivers the resources they need during recovery and transition back to their communities, working to ensure no one is left behind.