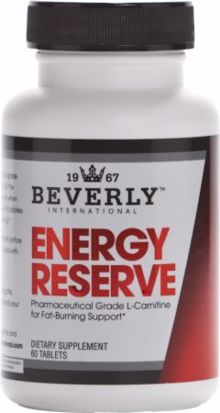 Go to Store
Quick Links to Deal PricesHow does this work and how do stores get listed? See our disclosure below to learn more.
Size
Deal Price
60 Tablets
$18.89
Go to Store
Go to Store
Compare store prices
See all Beverly International Products on PricePlow
Ingredients

Have you ever dieted away your hard-earned muscle? What if you found an amazing substance that burned fat, enhanced fat utilization, spared muscle glycogen, and reduced muscle catabolism? You'd probably think you found a newly developed muscle building compound. It's true that anabolic steroids certainly do all of the above. But, unlike steroids, your newfound substance does not raise blood serum triglycerides or help maintain HDL's (the "good" cholesterol). In fact, it does just the opposite giving you a much healthier blood lipid profile. If you saw both scientific and user reports suggesting that just such a substance exists, and the only reported side-effect was a euphoric mental state, would you be interested? Pretty ridiculous question, isn't it?

The fact is such a remarkable substance does exist. You probably even know a little about it. The name of this remarkable substance is L-Carnitine. Some of the fat burning products you have used in the past might list L-Carnitine on the label and you sure didn't experience the benefits noted above. That's okay, there are a number of reasons why that might have happened. Let's just say the scientific community has been impressed enough to fund a substantial amount of medical and scientific research centering around L-Carnitine. In fact, at least three U.S. pharmaceutical companies now make prescription tablets of L-Carnitine.

L-Carnitine basically serves two extremely important functions as far as we're concerned as bodybuilders, burning fat and the metabolism of branched chain amino acids (BCAA's). L-Carnitine is a co-factor which is required for transport of fatty acids into the mitochondria of your muscle cells where they serve as a substrate for energy production while sparing muscle glycogen. Carnitine deficiency causes the fatty acids to back up and accumulate in the blood ultimately resulting in additional deposition of fat, usually right in the areas where you already have the greatest accumulation.

L-Carnitine works synergistically with branched chain amino acids to increase their net metabolism. Remember that the BCAA's are the major amino acid constituents of your muscles. An increase in the amino acid content of the muscle will result in, at the very least, increased muscular hardness and possibly new muscle tissue. To sum up, L-Carnitine increases the utilization of fats for energy, sparing glycogen and amino acids. In essence, L-Carnitine shifts your fuel source utilization towards fats, leaving your amino acids and glycogen free to build muscle.

Research indicates the minimum dosage to minimize muscle catabolism while accelerating fat loss is 1000-1200 milligrams daily, divided into two doses. The dosage research proven most effective is 2-4 grams (2000-4000 mg) in 3-6 daily doses at three to six hour intervals. L-Carnitine is most effective taken on an empty stomach with water at least 45 minutes prior to eating and again 45 minutes prior to training. To maximize the effect of Carnitine on the metabolism of branch chained amino acids take 1200 mg L-Carnitine with a handful of BCAA's thirty minutes after training. You won't believe how quickly you'll recover. Cycle your L-Carnitine supplementation, 2-3 weeks on, 1-2 weeks off. L-Carnitine is non toxic but most people experience the fat loss benefits for only two or three weeks at a time due to the body's adaptation.

Is This for You?

If you are trying to reduce fat, increase muscle hardness, and retain muscle size and strength, it is! Remember, if fatty acids aren't utilized for energy while dieting, muscle tissue becomes your body's main source of fuel. If you want to improve your muscle-to-fat ratio, L-Carnitine supplementation is a must.

Energy Reserve contains L-Carnitine in its purest form. Research in this country and Italy has found that one gram taken daily, over an extended period of time, has the ability to support the high density lipoproteins (HDL), often referred to as "the good cholesterol." Stimulation of the adrenal gland is effected by carnitine which is important in aiding the body in using its fat reserves as fuel. A valuable energy, as well as lipotropic agent, for all those who are involved in vigorous athletic endeavors. Each tablet contains 600 mg of pure L-Carnitine.