Click the button above and PricePlow will email you with updates from Beast. 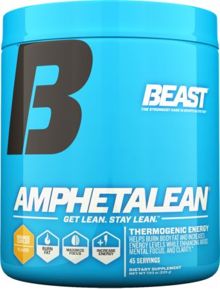 Amphetalean is Beast's fat-burning energy drink powder, well known for its feel-good action and incredible taste. It also comes in capsule form, but it's the powdered drink mix that really sets it apart.

There are two versions of this product - in 2013, the ingredients were upgraded for new and improved fat burning effects.

To tell the difference, just look at the bottle - an orange label color means that it is the older ingredients (reviewed by Mike and CJ below). A blue label is the new formula from 2013, with the ingredients below:

Mike and CJ reviewed the older version of Amphetalean, which has fewer ingredients, and is based mainly on caffeine, PEA, hordenine, and cAMP listed above. Hordenine acts as a natural MAO inhibitor to make the PEA last longer.

The mix of focus and energy enhancing ingredients in the updated version is below:

Where to buy it

Here on PricePlow, you can compare prices to get the best deal - save over 40% off retail by buying online!

Click the button above and PricePlow will email you with updates from Beast.