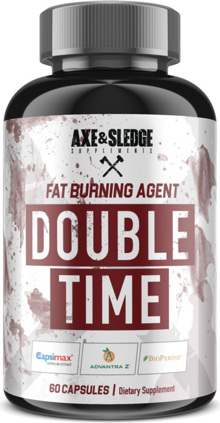 Go to Store
Quick Links to Deal PricesHow does this work and how do stores get listed? See our disclosure below to learn more.
Size
Deal Price
60 Capsules
$39.99
10% OFF
Go to Store
Go to Store
Compare store prices

When you need to kick your metabolism into overtime, reach for a bottle of Double Time from Axe & Sledge! Double Time is a fat-burning thermogenic that’s formulated for everyone. As the name suggests, Double Time is designed to be taken first thing in the morning and in the early afternoon to keep you energized, focused, and burning fat.

With 10 efficaciously dosed ingredients, Double Time is one of the most comprehensive fat burners on the market! Not to mention, Double Time uses three patented ingredients to maximize your results, including:

Double Time was specifically formulated to combat the common side effects that users experience from dieting, such as fatigue, decreased performance, difficulty concentrating, hunger, and reduced metabolic rate.

Taking Double Time alongside a well-structured diet and training regimen will result in:

Double Time won’t do the work for you, but it will help you reach your physique goals much faster. When you’re ready to lose the fat for good, grab a bottle of Double Time and get ready to work!

TAKE 2 CAPSULES WITH 8-10 OZ. OF WATER BEFORE YOUR FIRST MEAL OF THE DAY. TAKE AN ADDITIONAL CAPSULE 6-8 HOURS LATER AS NEEDED.

N-Acetyl L-tyrosine (NALT) is an acetylated form of tyrosine, a non-essential amino acid that can be synthesized by the body using phenylalanine.

Tyrosine is a direct precursor to three important neurotransmitters:

These neurotransmitters are crucial components of your sympathetic nervous system, which is activated during exercise. Excessive physical and/or mental stress can significantly deplete your neurotransmitters. So restoring their levels primes your body for performance and fat loss.

Supplementing with NALT may:

Caffeine anhydrous is the most widely used and researched ingredient in sports nutrition. It’s been proven time and again to be effective and safe. Caffeine is a powerful stimulant that quickly raises energy levels by inhibiting adenosine and phosphodiesterase.

Some evidence suggests that curcumin is capable of increasing your basal metabolic rate (BMR), resulting in greater caloric expenditure. The more calories you burn throughout the day, the easier it is to lose fat. It’s important to note that curucmin, by itself, isn't absorbed well in the small intestine.

This is one of the main reasons why we added BioPerine, a black pepper extract, to counteract this potential issue. BioPerine significantly increases the absorption and effectiveness of curcumin.

Dandelion extract (taraxcrum officinale) is also considered to be a powerful natural diuretic. In fact, it's been used as a diuretic for centuries in both Ayurvedic and traditional Chinese medicine. Since dandelion extract is also rich in vitamins and minerals, it can help rid the body of excess water, without depleting electrolyte levels. Dandelion extract primarily carries out its effects by increasing urinary frequency. Moreover, dandelion has antioxidant, anti-inflammatory, and cardioprotective properties.

White willow bark extract, also known as Salix alba, is commonly used to reduce fevers, inflammation, and pain. The primary bioactive compound in willow bark that’s attributed to its effects is called salicin. The main benefit of willow bark is pain relief, but it’s also commonly used in weight loss supplements to improve the effectiveness of other ingredients.

Choline bitartrate supplies the body with choline, an essential nutrient that’s responsible for a number of physiological processes. In regards to exercise, choline is most notably used for the production of acetylcholine. Acetylcholine is a neurotransmitter that’s essential for carrying out muscle contractions. Choline bitartrate is composed of choline bound to two tartaric acids, which improves absorption, bioavailability, and effectiveness.

Unfortunately, generic cayenne pepper extracts can lead to some negative effects, such as an upset stomach, which is why we chose Capsimax for Double Time.

Using OmniBead Beadlet Technology, OmniActive Health Technologies was able to harness the benefits of capsaicinoids, without the negative effects associated with cayenne pepper consumption. Through various mechanisms of action, Capsimax is able to increase lipolysis and fat oxidation, while reducing appetite.

Due to its rich content of synephrine, Advantra Z delivers powerful energy, boosts thermogenesis, and suppresses appetite. Advantra Z is one of the most effective weight loss ingredients on the market, which is why we use it in Double Time. Advantra Z is a branded ingredient developed by Innophos.

BioPerine is a patented black pepper that’s standardized to contain at least 95% piperine, which is the main bioactive constituent. BioPerine improves the effectiveness of Double Time by enhancing the bioavailability and absorption of each ingredient.

Since some dietary ingredients, such as curcumin, aren’t readily absorbed by the small intestine, we included BioPerine to help you get the most out of Double Time. BioPerine was developed by Sabinsa Corporation.