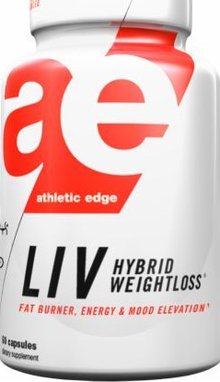 Go to Store
Quick Links to Deal PricesHow does this work and how do stores get listed? See our disclosure below to learn more.
Size
Deal Price
60 Capsules
$36.95
Go to Store
Go to Store
Compare store prices
See all Athletic Edge Nutrition Products on PricePlow
Ingredients

The core of LIV Hybrid Weight-Loss is the research-backed ingredient Meratrim, which is composed of two natural plant extracts, Sphaeranthus indicus and Garcinia Mangostana. Randomized, double blind, placebo-controlled studies have shown that subjects taking 400mg of Meratrim twice a day (for a total of 800mg) experienced significant weight loss in as little as a few weeks. Furthermore, at eight weeks, subjects on Meratrim reduced their waist and hip circumferences. This research also suggests that these benefits are due to Meratrim's ability to partially block fat cells from both the uptake and the formation of fat.*

175MG OF FAST-ACTING AND TIME-RELEASED CAFFEINE

A developed, specialized wild green oat extract, Neuravena concentrates specific constituents of the plant and has been shown in research to boost the neurotransmitter dopamine, having a positive impact on stress resistance. The overall benefit? Greater alertness, energy and focus, while also stabilizing stress levels.*

Theanine stimulates alpha wave activity in the brain and, when combined with caffeine, can improve alertness during demanding tasks. Research also suggests that it accelerates mental regeneration after exercise and reduces the negative side effects of caffeine, making it the perfect supplement to combat diet- and exercise-induced neurological burnout.*

This ingredient supports an increase in the mobilization of fat, assisting in weight loss.*