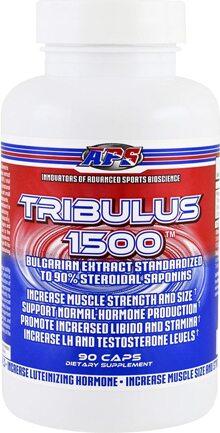 Go to Store
Quick Links to Deal PricesHow does this work and how do stores get listed? See our disclosure below to learn more.
Size
Deal Price
90 Capsules
$15.26
Go to Store
Go to Store
Compare store prices

The compounds in Tribulus 1500 work together to:

Tribulus 1500 by APS contains an extract of Tribulus terrestris herb (aerial parts – leaves and stems) and contains an unprecedented Bulgarian Tribulus extract that is standardized to contain an unprecedented 60% furastanol saponins, mainly furostanol glycosides (including protodioscin and protogracillin) and small quantities of spirostanol glycosides, sterols and other compounds. Unfortunately, 99% of all products on the US market contain little if any Protodioscin! This is important because Protodioscin is the active constituent in tribulus terrestris that is responsible for stimulating the Luteinizing Hormone and ultimately raising testosterone levels (naturally). Protodioscin is the compound in tribulus proven in Bulgaria and Russia to Increase LH and Testosterone levels. Due to the complicated purifying process to identify the active ingredients it takes 1,000 lbs of raw

Tribulus products were extremely popular in the late 90’s due to their effectiveness. Tribulus terrestris has long been celebrated for its unique ability to assist in ramping up levels of luteinizing hormone (LH), which in turn spurs significant (and natural) increases in the production of testosterone. This physiological activity is of primary importance to athletes because higher “Test” levels correlate directly to increased anabolism and greater strength. (It boosts sex drive, too.)

You may have assumed that any old Tribulus terrestris, would provide you with all the benefits associated with Tribulus 1500. That’s a major problem because Tribulus terrestris has been confused with the likes of Tribulus 1500 for several years. But they are not the same thing… not even close. Tribulus 1500 contains Protodioscin and Furastanol Saponins NOT just saponins as 99% of the products on the market contain. In fact, these saponins are based on a crude gravimetrical test method and not by HPLC. Basically these saponins are worthless! Most commercial tribulus products tested contain a very poor 0.5 – 2 mg per tablet/capsule of Protodioscin and Furastanol Saponins. This makes Tribulus 1500 an astonishing 6,000% stronger than most regular brands.

Tribulus terrestris is an herb which is endemic to many different geographical zones, from the Mediterranean regions, India, China, South Africa and Australia. Research undertaken by APS has shown that the phytochemical profile of the herb varies depending upon the geographical origin and the plant part utilized. Only Tribulus sourced from the Central European regions of Bulgaria and Slovakia have been found to contain protodioscin, which is an important indicator of quality and efficacy. Something very important, and usually overlooked, is the fact that the Bulgarian Tribulus terrestris phytochemistry is entirely different from the phytochemistry of the same plant found elsewhere in the world. The superiority of the Bulgarian Tribulus is due to the unique Bulgarian location and climate, thus making the Bulgarian Tribulus superior to all similar herbs worldwide

Additionally only the leaves and stem of the plant contain protodioscin, the fruit does not contain this phytochemical. APS has undertaken this research to ensure that our Tribulus product is of the correct phytochemical profile to ensure phytoequivalence with the original Bulgarian extracts. APS research and development team has worked directly with the first and only American scientists to separate pure protodioscin from the tribulus terrestris plant to manufacture Tribulus 1500.

Several hormones stimulate the body’s own production of testosterone. The two most important and potent stimulators of testosterone secretion are again luteinizing hormone (LH), which is secreted from the pituitary gland and also gonadotrophic releasing hormone (GnRH) from the hypothalamus. This regulatory system controlling testosterone is often referred to as the hypothalamus-pituitary-testicular axis. It operates under a classic negative feedback control. When testosterone levels are low, LH and GnRH stimulate testosterone production. When testosterone is high, LH and GnRH can be inhibited, subsequently shutting down the body’s natural production of testosterone. In a groundbreaking study by Milanov et al. (1981), eight healthy male subjects aged 28 to 45 years were administered 250 mg of Tribulus terrestris, three times daily at 8-hour intervals for 5 days. Hormonal levels were determined before and after the intake of the protodioscin including luteinizing hormone (LH). LH levels were markedly elevated following supplementation. Further work by Koumanov et al., also showed similar elevations in LH levels following Tribulus extract supplementation. In the same study, authors show that tribulus supplementation in humans increases plasma testosterone by an impressive 40%.

These active substances, which stimulate the sexual hormones production (androgens and estrogens), influence the central nervous system, and are defined as active components with anabolic character. The saponins increase the testosterone level, regulate the hormonal balance without affecting its functionality, improve the prostate activity, and decrease the risk of forming dihydrotestosterone. The protodioscin stimulates the production of luteinizing hormone and directly increases the secretion of the sexual hormones. Saponins set up positive nitrogen balance and improve the protein synthesis, including that in the muscles. The effect is increased physiological performance and enhanced body endurance in cases of physical and mental overwork. Other saponins in tribulus include: prototribestin, tribestin and tribulosin.

This component group in combination with saponins, protect against prostate swelling. Prostates get enlarged because of exposure to a rogue form of testosterone called dihydrotestosterone (DHT). DHT binds to receptors which tell your prostate cells to grow. DHT is 10 times more potent than testosterone because it dissociates from the androgen receptor more slowly. DHT is synthesized in the prostate from circulating testosterone by the action of the enzyme 5α-reductase, type 2. Tribulus 1500’s unique tribulus extract has phytosterols to help balance DHT levels. Many studies have concluded that Beta-sitosterol, Stigmasterol, and Campesterol promote healthy DHT levels on their own.

The research expanded on the herb and herbal species, creating a proprietary technology and methodologies to extract the valuable components of a wild herb. Further R & D efforts included incorporation in a tablet form of a substance greatly affected by absorbed humidity. Current research indicates that the dominant furostanolic saponin, PROTODIOSCIN is the active ingredient responsible for testosterone-boosting effects. (CAS No. 55056-80-9; Molecular Formula C51H84O22). This saponin appears to stimulate the release of luteinizing hormone (LH) from the pituitary gland. LH then travels via the bloodstream to the testicles, where it stimulates testosterone production. Protodioscin is also believed to increase (DHEA) production by the adrenal glands. This precursor becomes testosterone.

The Chinese and Indian manufacturers extract saponins, which do not have the same properties like the Bulgarian extracts. These saponins do not have any effect on the sexual sex drive and performance, nor on hormonal balance regulation, nor they have any other positive effect of the phytochemicals mentioned above. Further, these saponins are not fully absorbed and utilized by the body, while all active ingredients in the Bulgarian Tribulus terrestris are completely absorbed from the body. The main active phytochemicals in the Bulgarian Tribulus terrestris, (i.e. from the groups mentioned above) are determined as furostanol saponins calculated with reference to protodioscin.

Tribulus 150 seems to help support testosterone levels but at the same time tells the body that all hormonal levels are normal. This in turn gives it all of its unique features of helping to increase sports performance and muscle growth because of the increased testosterone support, but with none of the side effects as with other testosterone enhancing products. The main benefits are highly elevated testosterone levels which result in increased muscle mass, recovery, endurance and increased sex drive.

The true superiority of the effectiveness and safety of Tribulus terretris extract is expressed in a biologically balanced substance where are present not only Protodioscin, Protogracillin, but other key saponins in critically important ratios. For many years Tribulus has been used by athletes of the Soviet Bloc. Bulgarian Powerlifters have used it extensively with effectiveness since the 70′s and is the reason why they have dominated Powerlifting over the years!