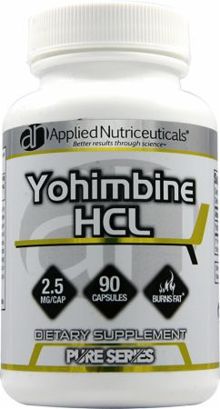 Go to Store
Quick Links to Deal PricesHow does this work and how do stores get listed? See our disclosure below to learn more.
Size
Deal Price
90 Capsules
$7.15
Go to Store
Go to Store
Compare store prices
See all Applied Nutriceuticals Products on PricePlow
Ingredients

Yohimbine is an indole alkaloid and an αAR-2 antagonist; αAR-2 is a pre- and post-synaptic auto-receptor in CNS and PNS that supports catecholamine release, acetylcholine, and insulin production within a normal range. (1) Yohimbine has been demonstrated in multiple studies to be a potent stimulant fat loss agent- Galitzky et al. (1988) found that with yohimbine “Plasma norepinephrine concentrations were increased (40-50%) after oral yohimbine administration.…..The lipid-mobilizing effect of yohimbine could be attributable to: (i) the increase in synaptic norepinephrine with a resultant increment in lipolysis by beta-adrenergic agonism; (ii) a decrease in alpha 2-adrenoceptor stimulation of human fat cell alpha 2-adrenoceptors; (iii) a blockade of presynaptic alpha 2-adrenoceptors. The use of highly selective alpha 2-antagonists will allow investigations into alpha 2-adrenoceptors…..”; There is also evidence that estrogen receptors have the tendency to up-regulate αAR-2 receptors, and this in turn can inhibit lipolysis, especially in women (Steen et al. 2004); Berlan et al. (1991) found that “Oral yohimbine administration (0.2 mg/kg) supported lipid mobilization (increase in plasma non-esterified fatty acids, NEFA) in fasting women (body mass index BMI = 20.2 +/- 0.5, age 35.5 +/- 2.7 years) without significant action on plasma glucose, insulin levels, heart rate or blood pressure during the time-course of the experiment (240 min). Plasma norepinephrine (but not epinephrine) concentrations were supported by oral yohimbine administration… The lipid-mobilizing effect of yohimbine in women is mainly attributable to the increase in synaptic norepinephrine with a resultant increment in lipolysis by beta-adrenergic agonism. In the standard fasting conditions (12 hours) the blockade of the antilipolytic fat cell alpha 2-adrenoceptors seems to be a minor component of the lipomobilizing effect of yohimbine”.*

Yohimbine supports the ceruleus in the pre-frontal cortex of the brain, which is an area associated with noradrenergic neurotransmission. Human studies using yohimbine to support noradrenergic neurotransmission have found that yohimbine-based stimulation of the locus ceruleus is “associated with the support of various cognitive processes, including vigilance, attention, working memory, and executive function(Riba et al. 2005)” α-AR2 stimulation is concurrent with a reduction in norepinephrine release, an inhibition in acetylcholine release, and inhibition in insulin release; Cameron et al. (2000), McDougle et al (1995), Grossman (1991), and Lenders (1995) also saw marked supporting noradrenaline levels in human subjects given yohimbine, which decreases α-AR2 activity. Higher catecholamine levels tend to be associated with greater levels of fat loss, as evidenced in multiple human studies using yohimbine; Lafontan et al. (1992) found that “Oral yohimbine (0.2 mg/kg) promoted a lasting increment of plasma non-esterfied fatty acids (NEFAs) and noradrenaline concentrations…..the lipid-mobilizing effect of α2 antagonists is mainly attributable to the increase in synaptic noradrenaline.” Ostojic et al. (2006) found that yohimbine significantly increased fat loss amongst elite athletes during a three-week duration of use (20mg/d dosage). Ostojic found that the “percentage of body fat significantly decreased in the yohimbine group after the supplementation protocol (9.3 +/- 1.1 vs. 7.1 +/- 2.2%; p less than 0.05). Furthermore, fat mass was significantly lower in the yohimbine versus placebo trial at post supplementation assessment (7.1 +/- 2.2 vs. 9.2 +/- 1.9%; p less than 0.05).” Research by McCarty et al. (2001) found that “Administered prior to exercise, it supports lipolysis and serum FFA levels both during and following exercise; blockade of adipocyte alpha-2 adrenoreceptors makes at least a modest contribution to this pro-lipolytic activity.* These considerations suggest that pre-exercise administration of yohimbine supports the respiratory quotient during and following exercise, thus promoting fat loss…… Pre-exercise yohimbine administration has the potential to work with the lipoprotein lipase activity of visceral adipocytes, support lipolysis, and support lipolytic response…..”*

Since the beginning, Applied Nutriceuticals has prided itself with giving our consumers the most cutting-edge and efficacious supplements possible. With this is mind, Applied Nutriceuticals has developed both the Innovation Series and Pure Series, two unique lines of supplements that are not a mere product evolution, but a REVOLUTION in the industry. The Innovation Series utilizes a new and novel approach to delivering our most potent supplements to date, by combining cutting-edge ingredients with unique delivery systems; the Pure Series is comprised of many of the best single-item ingredients on the market, giving customers a great low-cost alternative to other brands- why settle for ordinary when you can have extraordinary? Choose the path not taken, choose the next level, choose the Innovation Series and Pure Series from AN.