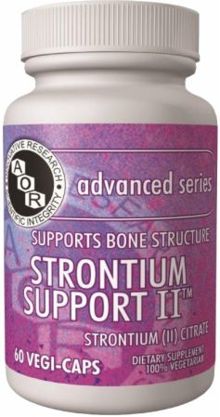 Strontium is a trace mineral which concentrates in the skeletal system. Strontium Support II now provides the daily dose of strontium in just two capsules.

Strontium is a mineral found along with calcium in most foods. Research has long suggested that it may be an essential nutrient required for the normal development, structure, function, and health of the skeletal system.* Clinical trials going back into the 1940s have supported this conclusion, but recent studies suggest that it can offer unique nutritional support of bone structure and function.*

Calcium and Strontium: the Dynamic Tension

Calcium and Strontium can both play key roles in the health of your bones - if you use them properly.* On the one hand, animal studies suggest that Strontium is not effective, and may even be counterproductive, if your calcium intake is not adequate. Current "official" recommendations suggest an intake of 1000 milligrams of calcium for younger adults, and 1200 milligrams for people over the age of 50. But remember that these numbers are your total calcium need. The more calcium you get in your diet, the less you need from supplements.

The best protocol - and the one used in the most recent clinical trials - is to take your Strontium either three hours after your last meal of the day, or one hour before breakfast in the morning, or both. Because studies suggest that one last dose of calcium just before retiring can help support bone health overnight, it may be best to take all of your Strontium before breakfast, leaving you free to take a calcium supplement just before you go to bed.*

Like the Strontium carbonate crystals (strontianite) from which it was first isolated, Strontium's role in bone health has long been hidden in obscurity. But its strength has allowed it to endure, waiting for the day that it could emerge and reveal its power.