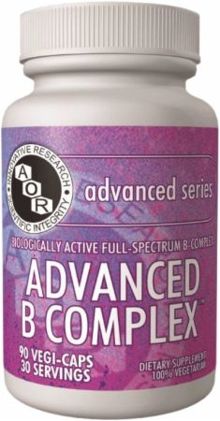 Advanced B Complex was designed to take the metabolic, cognitive and overall health benefits of B vitamins to the next level.* Advanced B Complex contains Benfotiamine, a lipid-soluble form of B1 that is more bioavailable than other forms of thiamin, as well as Pantethine, Pyridoxal-5-phosphate (P5P) and Methylcobalamin, bio-active forms of B5, B6 and B12 respectively.*

The B-complex is an officially recognized grouping of eight essential vitamins. Some sources dispute that number, claiming that there are in fact nine or ten (or more) vitamins within the B-complex, yet within most official, academic, and scientific circles, the number is generally accepted as eight, and these are:

There is a great deal of biological activity for which this group of vitamins is responsible, and there is also a great deal of overlap between the respective functions of each vitamin in the B-complex family. However, most of the overlap is centered around the metabolism of the three macronutrients (protein, carbohydrates and fat). Other tasks more specific to certain members of the B-complex group of vitamins include support for the brain and central nervous system, the growth and development of red blood cells, the maintenance of healthy skin and muscle tone, immune function and hormone activity.* Metaphorically speaking, the B-complex family of vitamins can be described as the 'transmission fluid' of the complex automobile that is the human body.

Vitamin B1 (a.k.a. thiamin): Thiamin is required to convert glucose and amino acids into energy as well as to develop red blood cells and maintain muscle tissue.* Thiamin is converted by the body into its active coenzyme form thiamin pyrophosphate (TPP). TPP is a catalyst for pyruvate dehydrogenase (PDH), a key enzyme responsible for the conversion of pyruvate into the all-important acetyl-CoA, which is central to the Kreb's Cycle that in turn generates cellular respiration.

Vitamin B2 (a.k.a. Riboflavin): While playing a role in the energy metabolism of carbohydrates, fats, and proteins, B2 is particularly active in skin and vision health.*

Vitamin B3 (a.k.a. Niacin): The derivatives of B3 form the basis of the oxidized and reduced forms of Nicotinamide Adenine Dinucleotide (NAD+ and NADH). The interaction between these coenzymes forms part of the basis (along with the aforementioned acetyl-CoA) of the Kreb's cycle, generating cellular respiration and energy in the form of ATP. B3 also plays an essential role in helping remove toxic chemicals from the body, and assisting in hormone production.*

Most niacin supplements are in nicotinic acid form, which has been associated with a 'flushing' effect, an unpleasant warming and itching of the skin when taken at significant doses. Inositol hexanicotinate is a form of niacin that is free of this effect.

Vitamin B6 (a.k.a. Pyridoxine): Vitamin B6 is most commonly known as pyridoxine, but in fact B6 is comprised of three organic forms, namely pyridoxal, pyridoxine, and pyridoxamine. Each represents a different stage in the body's metabolism of this important vitamin. Pyridoxal-5'-phosphate, or P5P, represents the advanced stage of this metabolism, the stage at which B6 has been converted into a coenzyme, a catalyst for at least 113 known essential enzymatic reactions in the body. These include the metabolism of all endogenous amino acids, including such particularly crucial ones as tyrosine, glutamine, cysteine and glycine. P5P is also important for the proper metabolism of essential fatty acids as well as the formation of red blood cells and neurotransmitters, making P5P a factor in optimal cognitive function as well. Notable features of the latter include the fact that P5P is required to convert tryptophan into serotonin as well as to release glucose from glycogen.

B6 has been successfully studied and surmised for its ability to support the immune system.* While the aforementioned studies used conventional B6 supplementation (mainly pyridoxine hydrochloride), it must be remembered that only the P5P converted from pyridoxine can be used for nitrogen and protein metabolism and heme synthesis. This underlines the potential for P5P in supplement form, especially in cases where the body's ability to synthesize it from its organic B6 forms is compromised in any way.

Vitamin B12 (a.k.a. Cyanocobalamin): Vitamin B12 has distinguished itself among the B-vitamins with the volumes of research attributable to its specific effects on neurological health.* B12 is also very important to the methylation cycle. The studies with B12's neuroprotective and neurogenerative benefits were conducted with the methylcobalamin (the active coenzyme) form of B12.*

Folic acid is needed for the synthesis of new red blood cells (which carry oxygen throughout the body) and DNA. Folic acid is often recommmended during pregnancy. Biotin is another B vitamin that is inolved in the metabolism of protein, carbohydrates and fats, and finally, although not strictly a vitamin, choline is an essential nutrient that is often grouped with the B-complex. Choline is a nitrogen-based organic compound that is found in the lipids of cell membranes. As such, it plays an important role in the structural integrity of cells as well as in the movement of essential lipids across cell membranes and in the synthesis of the key neurotransmitter acetylcholine.

In summation, the B-complex family of vitamins is essential to processing and disseminating the fuel required to keep the human body in constant operation.* Maintaining the proper intake of this group of vitamins is indeed essential for keeping that operation as optimal as possible for as long as possible.*