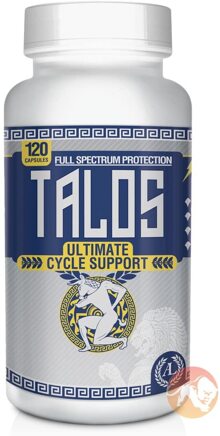 Go to Store
Quick Links to Deal PricesHow does this work and how do stores get listed? See our disclosure below to learn more.
Size
Deal Price
120 Capsules
$35.99
Go to Store
Go to Store
Compare store prices
See all Antaeus Labs Products on PricePlow

Antaeus Labs Talos – Ultimate Cycle Support
Talos was a mythological figure in ancient Greece – a giant man of bronze who protected the shores of Crete from invaders. Now you can harness the power of Talos to support your cardiovascular system.

The Talos formula promotes cardiovascular health in all users, though it is specifically designed to help combat the negative effects of exogenous administration of androgens. Talos seeks to combat the adverse health effects of self-administered anabolic steroids, designer steroids, and prohormones with a combination of antioxidants, vitamins, and potent herbal extracts.

Ingredients:
Black Rice Extract, 25% Anthocyanins (1300mg per recommended daily dose)
It has long been known that androgens cause an adverse shift the ratios of lipoproteins; causing an increase in low-density lipoproteins (LDL) and a reduction in high-density lipoproteins (HDL). [1] This is due to an increase in postheparin plasma hepatic triglyceride lipase (HTGL) activity; HTGL is the enzyme responsible for the catabolism of HDL. [2] High LDL and low HDL levels are associated with atherosclerosis and heart disease. Anthocyanins have been shown to increase HDL and reduce LDL concentrations in humans, [3][4] which may be due to the inhibition of plasma cholesteryl ester transfer protein (CETP), an enzyme which transfers cholesterol from HDL cholesterol to very low density or low density lipoproteins. [4] There’s also evidence that the hypolipidemic effects of anthocyanins may be due to increased CYP7A1 expression due to agonism of LXRα. [5]

“Our results suggest that anthocyanin supplementation in dyslipidemic patients has a beneficial effect on the lipoprotein profile, which includes a decrease in LDL-cholesterol and an increase in HDL-cholesterol concentrations.” [4]

SAMe (400mg from 800mg S-Adenosyl-L-Methionine Disulfate Tosylate)
Soon after the introduction of oral (17a-alkylated) steroids it became apparent that excessive doses or prolonged use can be deleterious to liver function, [6] and since then there have been several case studies of jaundice and liver failure secondary to oral steroid use – both self-administered [7] and in the clinical setting. [8][9] The hepatotoxic effects of oral androgens are of a primarily cholestatic nature.

S-adenosylmethionine is an endogenous methyl group donor and precursor to glutathione, which may be able to prevent androgen-induced cholestasis and liver injury. SAMe can inhibit bile acid-induced hepatocyte apoptosis, [10][11][12] downregulates expression of the inflammatory cytokine TNF-alpha, [13][14] and can reduce oxidative stress via glutathione replenishment, [15] which may also play a role in ameliorating the effects of cholestasis. [16] SAMe has been studied extensively as a safe and effective treatment for pregnancy-induced cholestasis, [17][18][19] and, in a case study, was even shown to reverse severe androgen-induced cholestasis. [20] Due to its distinct mechanism of action, it has an additive effect when used alongside UDCA/TUDCA. [10][18]

As a direct precursor to glutathione and an inhibitor of TNF-alpha and NF-Kb, the benefits associated with SAMe use are not limited to hepatoprotection. It is also in wide use as a general antioxidant and anti-inflammatory.

Ubiquinone (300mg)
Coenzyme Q10 is an essential component of the production of cellular energy. Supplementation has been shown to have a host of benefits, including lowering blood pressure, without significant side effects. [21] It can also maintain heart health by functioning as an antioxidant. By lowering the susceptibility of LDL to oxidation, it may reduce the atherosclerotic (artery-hardening) effects of LDL (“bad cholesterol”). [22][23]
“Our data support the concept that the CoQ10 level of the LDL subfractions is important in minimizing susceptibility of LDL subfractions to oxidation.” [22]

Trans-Resveratrol (200mg)
The naturally-occurring grape-derived antioxidant and phytoestrogen trans-resveratrol is believed to be cardioprotective through a number of mechanisms; amongst other things, it inhibits lipid peroxidation, induces vasorelaxation, and limits oxidative damage through the reduction of reactive oxygen species (ROS). [28]

“Resveratrol, a grape polyphenol, has shown considerable promise as a therapeutic agent in the treatment of liver ailments. Several studies have highlighted the hepatoprotective properties of resveratrol. Resveratrol has been shown to prevent hepatic damage because of free radicals and inflammatory cytokines, induce anti-oxidant enzymes and elevate glutathione content.” [29]

Astaxanthin (16mg)
Astaxanthin promotes healthy lipid metabolism as an antioxidant, [37] as a PPAR-α agonist, [38] and also by promoting expression of ATP-binding cassette transporters A1 and G1 (ABCA1/G1). [39] ABCA1 and ABCG1 mediate the efflux of cholesterol; helping to remove lipids from cells as the initial step in reverse cholesterol transport (RCT). RCT is the process by which cholesterol is shuttled back to the liver by HDL. [40]
“RCT is a pathway that transports cholesterol from extrahepatic cells and tissues to the liver and intestine for excretion. By reducing accumulation of cholesterol in the wall of arteries, RCT may prevent development of atherosclerosis. Cholesterol efflux, part of the RCT process, is a major process by which macrophages within the vessel wall secrete cholesterol outside cells.” [40]