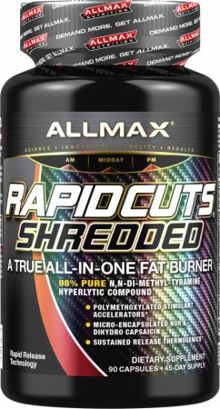 Go to Store
Quick Links to Deal PricesHow does this work and how do stores get listed? See our disclosure below to learn more.
Size
Deal Price
90 Capsules
Buy 1 Get 1 FREE
$24.99
BOGO
Go to Store
Go to Store
Compare store prices
See all AllMax Nutrition Products on PricePlow
Ingredients

CARDIO WILL NEVER BE THE SAME AGAIN!

RAPIDCUTS SHREDDED is pure, unadulterated fat-shedding potency. The most concentrated, research-backed ingredients known to fat loss science have been brought together to give you the kind of rapid, accelerated fat-shredding power you demand. RAPIDCUTS is simply the strongest, most advanced and most comprehensive fat burning product we have ever produced.*

RAPIDCUTS was created with a single focus; to create a formula specific to and exclusively for fat loss. RAPIDCUTS is recommended as an effective addition to diet and exercise to achieve mind-blowing results. Other weight loss formulas may be OK for average users, but RAPIDCUTS is an EXTREME FORMULATION for EXTREME RESULTS.*

The results achieved by RAPIDCUTS and its potent 3-Stage T.R.I. fat burning process are nothing short of amazing.*

RAPIDCUTS is formulated with Green Coffee Bean which supports normal, healthy insulin levels, especially following meals. Higher insulin levels can literally turn off fat loss. Unlike coffee beverages, green coffee bean extract does not go through the roasting process, rather, chlorogenic acids are the key ingredient that support the weight loss benefits of GCBE. First, they promote balanced blood sugar by inhibiting the release of glucose within the body. Secondly, chlorogenic acids boost the metabolic output of the liver, which in turn helps to burns more fat. This dual mechanism works to support lean body mass.*

Ashwagandha is a renowned Ayurvedic adaptogenic botanical grown in India which has been revered for thousands of years for its ability to balance, energize, rejuvenate, and revitalize. Extracted from the leaf and root of the plant, ashwagandha helps boost energy levels, helps to reduce stress-induced appetite cravings by controlling cortisol levels, helps promote a healthy response to inflammation, inhibits oxidative stress and slows the effects aging by inhibiting free radical damage.*

RAPIDCUTS SHREDDED is the extreme fat loss formula designed for men and women who are aiming for extreme competition level results. This is the most powerful and effective weight loss formula we have ever brought to market.*